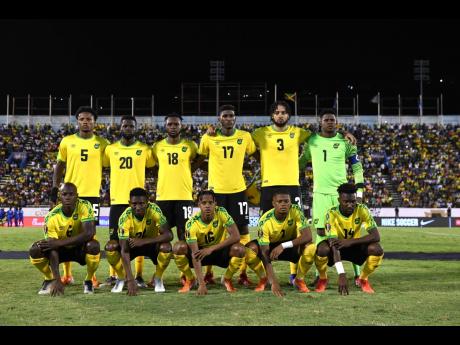 Ricardo Makyn
Members of Jamaica’s national senior men’s football team, the Reggae Boyz, pose for a photo before the start of the Jamaica vs Honduras Concacaf Gold Cup match, held at the National Stadium on June 18, 2019. 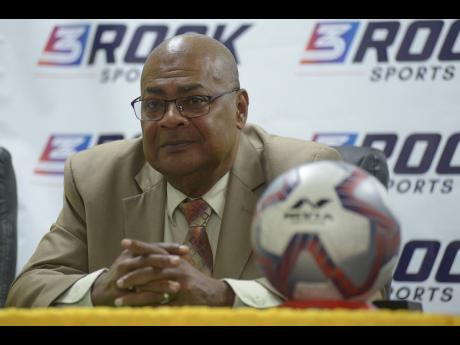 Although the Jamaica Football Federation (JFF) has offered new contracts to members of its senior men’s team, there is still an impasse as players have refused to put pen to paper. They are understood to not only be uncomfortable with the terms on...

Although the Jamaica Football Federation (JFF) has offered new contracts to members of its senior men’s team, there is still an impasse as players have refused to put pen to paper. They are understood to not only be uncomfortable with the terms on offer, but what they believe is unfair and unprofessional treatment meted out to them.

It was reported that the Reggae Boyz, ranked 47th in the world, had requested a higher figure than that offered by the JFF, and while many in the football fraternity defend the players’ right to negotiate whatever fee they believe closer meets their worth, some say that the players are being unreasonable because of the JFF’s publicly known financial limitations.

The latter argument is spurred by comparisons of match fees offered by the JFF to its players, in relation to what is offered by the English Football Association (EFA) to its team.

The England team (ranked fourth) has been made relevant to the topic because of reports that up to 10 England-based professionals are now applying for Jamaican passports to represent the Reggae Boyz, instead of waiting for selection by the EFA which, in some cases, may never materialise.

Former Reggae Boy Ricardo Gardner says he is pleased that the players know their rights.

“I think they’re representing themselves well, to be honest,” Gardner said.

Gardner says he has no reason to question the players’ loyalty to the country, but he understands that they need to feel valued.

“You know that they can put on this shirt and play 90 minutes of football and end up never kicking a ball again,” he asked. “It’s how people operate in the business world. Football is these players’ career.”

Gardner, who represented Jamaica between 1997 and 2012, told The Gleaner that tense negotiations between players and JFF officials is nothing new, as he and his teammates would spend many hours on nights before games, at an impasse about fees. For this, he credits then technical director René Simões for how he stood up for the team.

Gardner’s former national teammate, Ricardo Fuller, a Reggae Boy from 1999 to 2012, also recalls these incidents and said it led to players getting minimal sleep before games, but being expected to perform.

He says the national team is, in principle, the best players chosen to represent the country, and it means that the JFF should treat them with fitting respect. However, this is not the case, even when he played.

Fuller says that as a full professional, the treatment he received from the JFF regarding payments did not match that of his club teammates by their international teams.

The JFF is also offering US$1,000 as the match fee for international friendlies it describes as “high-profile,” and half that figure for friendlies against lower-ranked opponents. The Federation says players will earn half the profits on image rights, meaning merchandise such as shirts bearing their names.

Although the sum paid to the England team has remained undisclosed by the EFA, in 2018, the British Broadcasting Corporation (BBC) worked out a rough figure of what it believes is earned by each player.

Since 2007, all the match fees that would have been earned by England players have instead gone to charities through the England Footballers Foundation. This figure is over £5 million (then around J$852 million). It is important to note though that this is no inconvenience to the the average England international, as he earns over £50,000 per week (over J$10 million), while star players earn double, triple, and in some cases, quadruple that amount.

“From the start of 2008 up to and including England’s game against Colombia (at the 2018 FIFA World Cup), there have been 122 matches,” BBC writer Justin Parkinson said in an article in 2018. “That suggests total payments to players per match have come to about £41,000 (then just under J$7 million) on average.

“If a squad consists of 23 players – some contain fewer, some more – that equates to just under £2,000 (then J$341,000) per squad member per match. If the money is shared among only those who get onto the field, rather than just the bench, that amount would rise by a few hundred pounds.”

Based on figures released by the Trinidad and Tobago Football Association (TTFA) of what it pays its team (ranked 103rd), on international duty in 2019, the JFF is paying more. However, the TTFA has not said whether players have since received an increase. The TTFA said it offered US$1,000 (then J$126,000) to its starting team, while substitutes earned US$700 (then J$88,000), and unused substitutes were paid US$500 (then J$63,000).

Figures reported last year showed that the United States Soccer Federation paid each player on the senior men’s team (ranked 22nd) US$11,210 (around J$1.8 million) for each match during their qualifying campaign for the 2018 World Cup. Each player also received US$62.50 (J$10,310) as per diem (daily pocket money) for local matches, and US$75 (J$12,422) as per diem internationally.

But Fuller says that the figure offered by the JFF is not on par, especially as an additional per diem is not offered, as it is with the US team. He says that while the figure may seem like good payment to the public, it cannot cover certain unexpected expenses Jamaica’s footballers endure while on national duty.

“There are many things we had to pay for ourselves while we were on international duty, things that the JFF did not consider,” Fuller told The Gleaner. “I remember once we went to Nigeria and we had to leave the hotel we were staying at. The hotel was dirty and deplorable; even the swimming pool, the water in it was green. We had to spend our own money and find another hotel to stay.”

Fuller said that he, like Gardner, had many occasions where he had to upgrade his plane ticket from economy to business class, to avoid the risk of injury from sitting in a cramped space on lengthy flights.

The Gleaner sought a response from the JFF, but all officials contacted were unavailable for comment.

The next assignment for the Reggae Boyz is an international friendly match against the US in Austria on March 25. The team is preparing for the Concacaf Gold Cup and FIFA World Cup Qualifiers later this year.