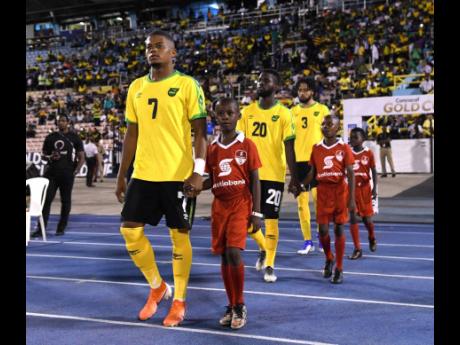 File
Leon Bailey and other members of Jamaica’s national senior team make their way on to the field ahead of their Concacaf Gold Cup match against Honduras at the National Stadium on June 18, 2019. 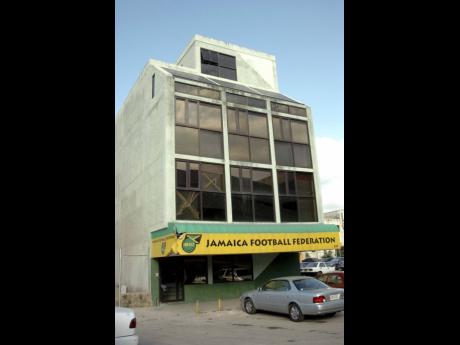 It has been two months since preliminary discussions began between the Jamaica Football Federation (JFF) and the senior men’s team regarding long-term deals for the World Cup qualifiers. While no resolution has been reached in the matter, attorney-...

It has been two months since preliminary discussions began between the Jamaica Football Federation (JFF) and the senior men’s team regarding long-term deals for the World Cup qualifiers.

While no resolution has been reached in the matter, attorney-at-law Robert Taylor, who is representing the players in the negotiations, noted that the unresolved grievances are not only about match compensation.

“The contractual issues are not limited to player remuneration but relate to overall player development and their welfare in the medium to long term,” Taylor told The Sunday Gleaner.

Talks began in January with the goal of securing deals for the players ahead of the World Cup qualifiers, which start in September.

While, initial discussions between both parties were encouraging, there has been no movement towards an amicable solution. The main area of contention has been the match fees for the players per game for the qualifiers.

Despite not detailing the specifics of the talks, Taylor said that the outstanding issues are important and will require additional discourse between the federation and the players.

“It is for this reason that these matters may span or require continued ongoing dialogue,” Taylor said.

While the JFF in a statement on March 2 stated that it hoped that those contracts would be signed by the end of that week, the first signs of discontent came on March 7.

A number of players including captain Andre Blake as well as defender Damion Lowe posted cryptic messages on their social media accounts that said: “Take a Stance” with the hashtag ‘Stronger Together’. That offer was eventually rejected by the players, with Blake later stating on local radio that negotiations were off.

However, the JFF received a revised offer from the players on March 8 reportedly for US$3,000 per game indicating a return to the table to possibly reach a resolution.

JFF Technical Committee Chairman Rudolph Speid said that they have improved their offer to the players, but that their was still disagreement on some issues.

“We are at a stalemate. We have made known what our position was. When they made their offer, we made an offer to that offer, so we (JFF) are the ones waiting,” Speid said.

While acknowledging that there have been improvements in the talks, Taylor says that there are still areas where the players need assurances.

“There has been some progress to date and some more ground left to cover bearing in mind that the issues include matters of governance, player welfare, etc, which by their very nature are involved,” Taylor said.

Speid said while there are areas that they can improve on, they are limited as to what they can provide based on their resources.

“There are always other stuff that we are probably not perfect on but the [work] to improve those are ongoing,” Speid said. “One of the issues that came up was flights over four and a half hours to be first class. We can’t afford that based on the money we get for friendlies.”

It is a situation that has left head coach Theodore Whitmore without several of his key players such as Blake, Bayer Leverkusen’s Leon Bailey and Ravel Morrison, 43, ahead of the friendly international against the United States with some players reportedly turning down the invitation because of the ongoing issues.