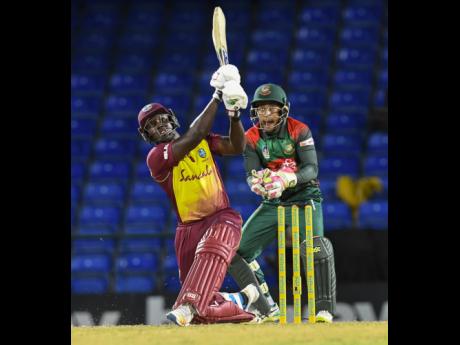 With a number of West Indies cricketers recently failing fitness tests, Jamaican all-rounder Rovman Powell said he is not leaving anything to chance, as he has taken steps to avoid falling into this category.

Powell, who played only one match in the three game T20 series, said he has taken note of the players failing their fitness tests and therefore he has taken steps to ensure that he maintains a high fitness standard at all times.

“Fitness is one of the most important things because not attaining a certain fitness standard then you can’t get picked and so that is very important as well as working on the batting,” said Powell.

“I have some work to do with Robert Samuels and also some gym programmes from the West Indies to complete,” he added.

He was a member of the West Indies side for their T20 and ODI away series to Bangladesh earlier this year. However, the 26-year-old Powell did not find favour with the West Indies selectors as he was only selected for the T20 series against Sri Lanka.

“I was a little bit disappointed because I think when I went to Bangladesh, I made some strides, but it is what it is,” Powell said.

“It is an opportunity for me to sit down and evaluate my cricket and keep working hard,” he said. “The aim is just to get fitter and get the all-round game better and practise how to bat for longer periods.”

The talented all-rounder contributed a mere seven runs in the third T20 game against Sri Lanka.

While the Caribbean side won the series 2-1, Powell admitted that he should have done a lot better with his performance, but shared that he continues to learn from each game.

“I am not disappointed with this because to be honest it’s one game where I needed to hit a few sixes and I did not and so it was just one of those things. We won the series and that is very important for us,” he said.