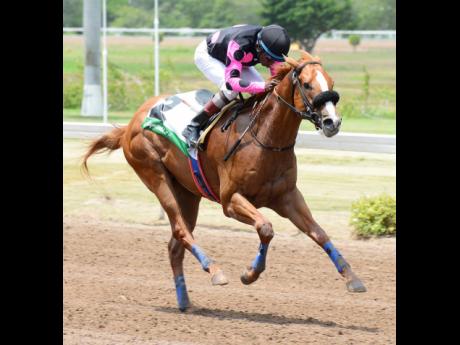 Though they haven’t raced since the back end of last season, SPARKLE DIAMOND and SIR ALTON have unquestionable class and speed, which could nullify the effects of their absence from the races with both looking in good shape at exercise.

SIR ALTON was spotted last Saturday morning, galloping 1:00.0 from the gate at five furlongs straight. Having matched strides and beaten last year’s top campaigners, similar to derby-winning stablemate, KING ARTHUR, who won at the distance off the lay-up on Thursday, he is capable of flooring this field. , Though not having reached the rating of SIR ALTON, who placed second behind TOONA CILIATA in the grade-one Viceroy Trophy last October at the peak of his form, SPARKLE DIAMOND has been busier off the break, putting in speed gallops every weekend since mid-March, which could give him the edge on fitness

However, maintaining form has eluded SPARKLE DIAMOND, who won three races on the trot in 2019 after finishing down the track on debut. Expected to dominate as a sprinter in the higher classes last year, the speedster started only four times, disappointing terribly in his last run, as the 6-5 favourite, among open allowance runners at five and a half on December 27.

Moved from Errol Waugh to Anthony Nunes after being sold privately, SPARKLE DIAMOND has been ripping the exercise track as usual with a figure eight now added to his arsenal. However, everything depends on what he does at the start, especially off the lay-up, considering the slowly-into-stride tendency he had developed prior to going off.

What the locals lack in class, they make up for it in race-fitness. MR UNIVERSE blinded UNIVERSAL BOSS with speed last time out with a good win at the distance. He reports very with two runs under his girth this season, getting 16lb from the foreigners.

Meanwhile, run-on sprinter, LABAN, who did his best for third behind PATRIARCH last Thursday, has a 58.1 clocking at the distance to his credit, beating SHE’S A HIT and ENGLAND’S ROSE in September. Though not the quickest from the gate, he could use the stand-side bias to mow down the la- up horses should they skip a beat from their mid track stalls.