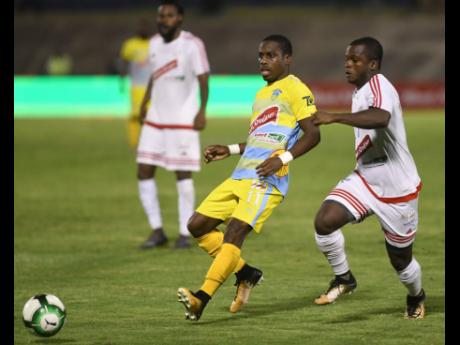 File
In this file photo from April 2018, then Waterhouse FC player Tremaine Stewart (left) is tracked by Portmore United's Kemar Phillpotts during their Jamaica Premier League final at the National Stadium.

Dunbeholden FC forward Tremaine Stewart passed away after collapsing while playing football in his community of Gordon Pen, St Catherine on Sunday morning.

The Gleaner understands that the 33-year-old attacker was taken to the Spanish Town Hospital, where he was pronounced dead.

He left Portmore the following season for Waterhouse and helped them to consecutive Premier League finals 2018 and 2019.

He last represented Waterhouse in the 2019-20 season, which was cancelled because of the coronavirus pandemic.

He joined Dunbeholden for the 2020-21 season but was unable to kick a ball officially for his new club, as domestic football is yet to get the approval to start.