All set for Central Champs 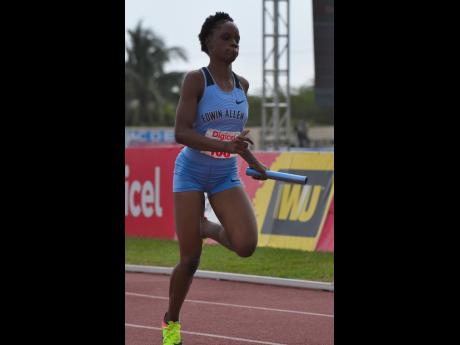 File
Tia Clayton anchors the Edwin Allen Class Two girls 4x100m team to victory in a record time of 43.80 on the final day of Central Athletics Championships, which was held at GC Foster College last year.

Defending male and female champions, St Jago High and Edwin Allen High, will be hoping to continue their dominance, as the two day Central Athletics Championships begin today at GC Foster College of Physical Education and Sports starting at 8:30 a.m.

The championships will get underway with the Shot Put , Class One Discus Class and 2000m Steeplechase events.

This will be the second regional meet staged this season, following the Anthrick Corporate Area Development Meet, which was held three weeks ago and will be used as a qualifier for next month’s truncated ISSA/GraceKennedy Boys and Girls’ Athletics Championships, with top two finishers in track events automatically qualifying for Champs.

The first session, which will end at 11:25 a.m. with the running of the 4x100m relays in all classes, will only see females in action.

Here, the top four teams from Champs, Edwin Allen, Hydel, St Jago and Holmwood Technical, are set for fierce battles, with the likes of a rejuvenated Vere Technical and Manchester High also expected to figure prominently in the mix.

Thirty finals, 16 on the track and 14 in the field, will be contested today with all field events being straight finals and all track events run as timed finals.

NOT TOO CONCERNED ABOUT WINNING

After dominating for the past 10 years, Michael Dyke, Head Coach of defending girls champions Edwin Allen, says he is not too concerned this time around, about winning the overall title.

“This time for us, it is not about winning. I am happy the athletes are getting a chance to compete, winning is not at the forefront of our thoughts. I am just hoping that the athletes compete and do so safely and everybody return virus-free and healthy,” said Dyke.

“This championships is to see where they are, leading up to Boys and Girls’ Championships, as there was a little rust among them due to the several weeks of inactivity,” Dyke stated.

Edwin Allen’s biggest threat is again expected to come from the Corey Bennett-coached Hydel, especially in Class Two, where the likes of Kerrica Hill and Alana Reid are tipped to put pressure on the Clayton twins - Tina and Tia.

The boys will be in action in the second session of the competition, which begins at 1:00 p.m. with 25 finals (14 on the track and 11 in the field), on the schedule. As is the case with the female event, all field events will be straight finals and all track event will be timed finals.

St Jago High has never lost at these championships and look set to continue their dominance this season.