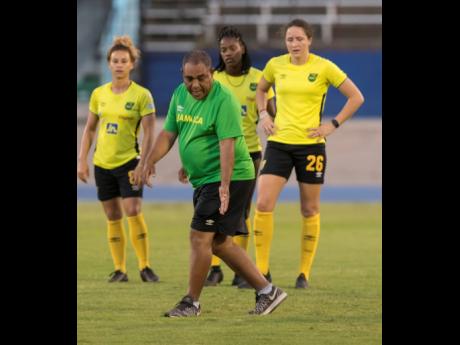 File
Former Reggae Girlz head coach Hue Menzies (foreground) gives instructions during a training session at the National Stadium on Monday, May 13, 2019, ahead of an international friendly against Panama.

Menzies, who walked away from the job just months after leading the team to their historic 2019 FIFA Women’s World Cup participation in France, did so after after a bitter battle with the federation over monies owed to himself and the Girlz.

However, the experienced coach is hoping that the parties can avoid a repeat of what he described as a negative and disruptive situation, and believes it is imperative that a written agreement is secured. This follows recent successful negotiations between members of the national senior male football team and the JFF.

“The (Reggae) Boyz got their contract sorted out and the Girlz should be next. There shouldn’t be any hesitation or waiting until something happens,” Menzies stated. “The Boyz’s contracts have been sorted out, so they need to sort out the females as well and start getting the programme going, and we should get these contractual things done before any competition.”

In their negotiations with the JFF, the Reggae Boyz insisted on increased match fees, better travel arrangements and guaranteed support staff for matches.

“The JFF are going to have to really evaluate themselves and the type of players they have, as these are not regular little amateur players coming out of Jamaica. They are all professionals and they expect to be treated like professionals. So they will have to make sure that, even if you’re not paying them money, from a structure standpoint, there needs to be professionalism,” Menzies said.

“So it is is very important for these Reggae Boyz and Reggae Girlz. These players are playing in professional environments and they expect to be treated like that,” he continued.

Menzies also pointed out that national associations worldwide are bringing women footballers’ pay in line with that of their male counterparts, and believes it is time for the JFF to make the improvements needed to match the calibre of the team.

“Everywhere now is equal pay. The USA, France, Argentina, by the way their system is structured, it is emphasising equality. We are so far behind in women’s football and we need to catch up, because we do have the pedigree to be a top team on the world stage,” said Menzies.

JFF General Secretary Dalton Wint could not provide much details when he was contacted by The Gleaner yesterday.

However, he assured that plans were afoot to bring the members of the national senior women’s team to the table to finalise their agreement.

“That will be done,” Wint offered, when asked if the JFF will be inviting the Reggae Girlz to the negotiating table.