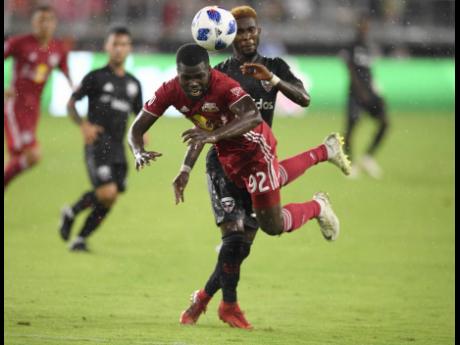 File
In this file photo from July 2018, Kemar Lawrence (front), then of New York Red Bulls, gets airborne while challenged by then DC United defender Oniel Fisher, Lawrence’s national teammate, during the first half of a Major League Soccer match in Washington, DC.

National defender Kemar ‘Taxi’ Lawrence’s stay in Europe lasted only 14 months. Now the 28-year-old will make his return to the United States for Major League Soccer (MLS) franchise Toronto FC (TFC), reunited with some familiar faces from his previous stint in the league with the New York Red Bulls.

The club made the announcement on its website yesterday that it secured the service of Lawrence from Belgian club Anderlecht until 2024. He will be added to the roster pending receipt of his international transfer certificate.

The acquisition means that Lawrence will see familiar faces from his five-year stint with the Red Bulls such as Chris Armas who is now Toronto FC’s head coach, and General Manager Ali Curtis, who acquired him in 2015 when he was the Red Bulls’ sporting director.

Curtis said that he is looking forward to the impact that Lawrence will bring, expressing his delight at being able to bring him back to the United States.

“We are very excited about Kemar joining the club,” Curtis said on TFC’s website. “He’s a fearless competitor, he has experience, and he immediately makes our team better.

“Kemar is a lockdown wingback and we are excited to get him going. Looking forward to him and his family planting roots in Orlando and then Toronto.”

Toronto FC are playing all their home games in Orlando, Florida, because of COVID-19 restrictions in Canada.

Lawrence’s five years with the Red Bulls had individual and club success as he was named to the 2018 MLS Best Eleven, named a 2019 MLS All-Star, as well as two regular-season titles in 2015 and 2018.

After refusing to sign an extension with the Red Bulls at the end of the 2019 season, Lawrence signed with Anderlecht in January 2020. Despite missing a part of the 2021-22 preseason because of family issues, he made 16 league appearances for the team and scored one goal as he helped them secure a spot in the Belgian league championship play-offs.

Armas, who coached him during that 2018 regular-season title win, said that he is relishing the opportunity to work with him once more.

“I believe that we are a really good fit for Kemar and that he complements our roster well,” he said on the club’s website. “He adds experience, intensity, and a defensive presence that is fierce. I am excited to start working with him again.”