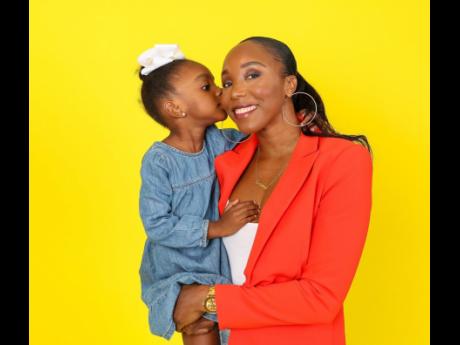 For all the many milestones that Olympian Sherone Simpson has had in her decade-long professional career, she is finding personal satisfaction in motherhood and the rapid growth of her four-year-old daughter, Leanna.

In the midst of a career in which she still was competing at a high level, Simpson welcomed her first child in October 2016, this after the previous season, when she helped Jamaica win gold as a member of the 4x100m relay team at the 2015 World Championships and became 100m champion at Pan American Games that same year.

It was always her desire to start a family eventually, but Simpson said that the long demands of a season had her waiting for the right opportunity.

At the peak of your career

“I always wanted to be a mother, but when you are at the peak of your career and you are travelling for months, looking at that, it was kind of hard to go ahead. But when it came closer, especially for me having two knee surgeries, I knew when the time came, that it would be the right time,” Simpson told The Sunday Gleaner. “So I knew it was the right time for me.”

Simpson would return to the track in 2018, but at the end of the 2019 season, she decided to retire in order to be there for Leanna. Simpson recalled the early weeks after giving birth, using all the mental fortitude she gained during her competitive career to persevere.

“The first couple of weeks I had to be strong mentally and also (to have) patience. They say patience is a virtue, I had to have a lot of patience and just to know that this will pass,” Simpson said. “Those first couple of weeks, it was like a lot of crying, but having my mummy (with me) really helped to make it easier for me. A lot that I have learnt in track and field has really helped me in motherhood.”

Simpson says that she is already seeing some of the competitive fire in Leanna that she had while competing, reflected when she participates in her extracurricular activities. Traits, she feels, will bode well for a future athletic career if she so chooses, not surprisingly, wanting her to keep it in the family, specialising in the sprints.

“I think she is a natural. I think she is born for the track. I lot of people have said this to me. She is doing quite a few extracurricular activities, so whatever she likes more, then I’ll just support, but I do think though she will do track and field,” Simpson said.

Simpson says that her motherhood experience has been most rewarding because of the pride she feels in seeing her daughter being resilient at an early age, a trait that she wants develop in her as she grows older.

“She is just so smart and you know, I’m just happy to see her doing so well. And so whatever she’s doing, she always tries to do it to her best, and she just never gives up, and that’s what I really like, and she’s a true competitor already,” Simpson says. “She doesn’t like to lose, whether in class, dancing, swimming, she just gives it her all and it just brings a smile to my face. It just warms my heart to see how well she tries to do whatever she is doing.”