‘We are building a dynasty’ 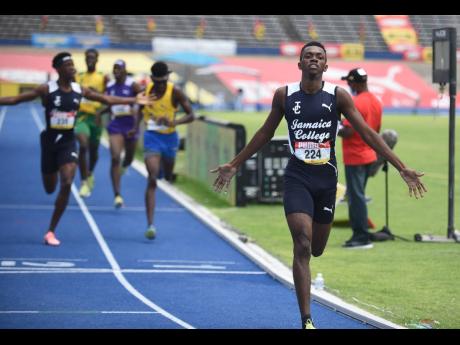 Wayne Robinson, principal of the newly crowned ISSA/GraceKennedy Boys’ Champions Jamaica College, has warned rivals there that his institution is now planning to build a dynasty and they have no plans to relinquish the Mortimer Geddes trophy...

Wayne Robinson, principal of the newly crowned ISSA/GraceKennedy Boys’ Champions Jamaica College, has warned rivals there that his institution is now planning to build a dynasty and they have no plans to relinquish the Mortimer Geddes trophy anytime soon.

Robinson said they plan to dominate the Boys’ Championships like they did in the Manning Cup competition when they won five consecutive titles between 2013 and 2017. In fact, JC, who are reigning Manning Cup champions, have won seven of the last 10 titles.

“We have put in place a whole team and whole system and if you know Jamaica College, our football tradition tells you what we are about going forward,” said Robinson.

JC secured their first Boys’ Champs title in 10 years after dethroning 2019 champions Kingston College (KC) at the end of the five-day meet at the National Stadium last Saturday. The Dark Blues tallied 328.5 points ahead of KC (313) to capture the title. Calabar High were third on 241.5.

The Old Hope Road-based JC appear to have the athletes to defend the title in the next two to three years. The champions were dominant in Class Two as they tallied 137 points to KC’s 93. Calabar were next in the class with 43 points. However, KC outscored JC by 15 points in Class Three as they recorded 56 compared to JC’s 41. Calabar were just behind with 38.

National track and field technical director Maurice Wilson said based on the strengths and quality of the JC team, he believes that they could dominate Champs for years to come.

“I think that they can dominate because they have a very strong team, a young team, they have an excellent head coach and so that is why I think it is possible,” said Wilson.

“I think that the support has always been there, they showed the model with football and so I expect the same,” he said. “I know that KC are very strong and I know that Calabar are rebuilding, but right now JC seems to be the team that is well prepared to dominate for a long time,” Wilson said.

The 2021 Boys and Girls’ Championships was held under strict COVID-19 protocols and without spectators. Last year’s meet was cancelled shortly after the first confirmed case of the coronavirus was detected on the island.