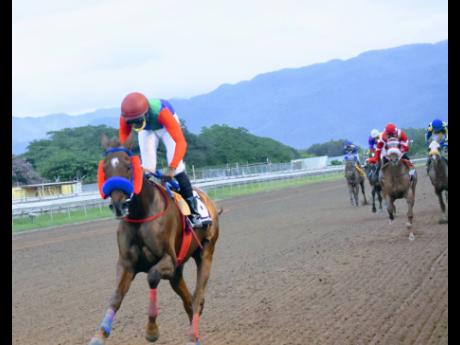 DOUBLE CROWN returns off a four-month lay-up carrying topweight, but back among overnight allowance runners in Tuesday’s Labour Day Trophy, after dismissing classy ANOTHER AFFAIR at the level on January 23.

Renewing rivalry with imported EXCESSIVE FORCE, DOUBLE CROWN has looked sharp at exercise but will be giving the foreigner 10lb at seven furlongs, a 14lb weight swing from their last meeting, which he comprehensively won, a near six-length victory on December 23.

EXCESSIVE FORCE met DOUBLE CROWN a week and a half after getting off the mark at six furlongs in his third start. However, allowing the classic-placed local colt four pounds, he made the mistake of being slowly into stride and was put to the sword at seven and a half furlongs.

Both horses returned to win their follow-up races, EXCESSIVE FORCE clobbering AWESOME TREASURE in a non-winner-of-three. DOUBLE CROWN floored ANOTHER AFFAIR two levels higher, matching the derby third-place filly for speed in a duel at eight and a half.

Whereas DOUBLE CROWN has been missing from the races since, EXCESSIVE FORCE has been busy, competing in five events, including a second victory over AWESOME TREASURE, reaching overnight allowance where he ran smack into SUPERLUMINAL at nine furlongs and 25 yards on May 8.

Again, it was his tendency to be slowly into stride that hurt EXCESSIVE FORCE against SUPERLUMINAL, an unforgiving nine-year-old pacer, who ticked off a 16th career win with his usual stubborn stretch-run rally when challenged by the foreigner.

Though he is race-fit and has the weight swing in his favour, breaking dead against the rail is a bad omen for a horse with EXCESSIVE FORCE’s habit at the gate. If he gets shuffled back at the start, he will be crowded on the inner, surrounded by EAGLE ONE, EL PROFESOR and ANOTHER BULLET. DOUBLE CROWN will also be coming around from stall six with Omar Walker, who is not the easiest of riders to get past up the lane on a horse with enough gas in the tank to get home.

DOUBLE CROWN left in impeccable form in January but has the weight swing against him. EXCESSIVE FORCE reports more experienced, but will have to be sharp at the gate to avoid the half-mile pocket. A lot depends on whether the lay-up will blunt DOUBLE CROWN with the big weight. However, his exercise reports suggest he is razor-sharp and raring to go.