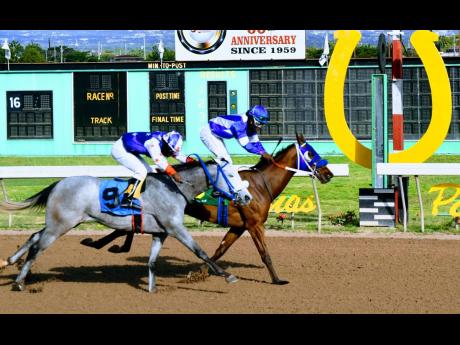 SATURDAY’s closing event will be a sprinter’s paradise, non-winners of two races, going five and a half furlongs, SURE CURLIN and SUPER DUPER, the top contenders and drawn alongside each other.

SURE CURLIN has 10 runs under her girth, the last three being quality efforts after narrowly getting off the mark at four furlongs straight on New Year’s Day. In contrast, SUPER DUPER, making her fourth start, hasn’t raced in almost six months but kept equally good company as a two-year-old and produced a bullet work at exercise last Saturday morning.

Similarly handicapped, the two speedsters are expected to dominate the lead. Both are bred to sprint. SURE CURLIN is a half-sister to retired SOUL CURE whereas SUPER DUPER’s grand dam, ARANTXA, produced the likes of RAMPAGE and COMMANDER ZERO.

SURE CURLIN hasn’t done anything fancy at exercise. That has never been Patrick Lynch’s style. However, note that her 1:09.3 for five and a half furlongs on May 2 was in the company of stablemate RUM WITH ME, who emerged from that work to convincingly cut down imported CHITU PRINCE in a six-furlong, non-winners-of-three event, six days later.

Taking on non-fours on Tuesday, RUM WITH ME placed fourth in a bang-up finish at seven and a half furlongs behind DEJAE’S BOY, BIG BIG DADDY and FEARLESS CHAMPION.

SURE CURLIN also put in a good shift after her workout with RUM WITH ME, placing second to SECRET IDENTITY at six furlongs on May 13, the second occasion on which she was the next horse behind the 1000 Guineas prospect, having placed third when both were beaten by ACTION ANN in the March 13 Hotline Stakes.

SUPER DUPER’s stablemates, GENTLE GIANT and SUDDEN FLIGHT, have been using recent races to round into form and could also be on the lead, trying to unsettle SURE CURLIN. However, Dick Cardenas has a cool head except when boxed in. Considering SURE CURLIN is drawn outside the potential rabbits, he should be able to keep tabs on his main threat, SUPER DUPER, with Anthony Thomas astride.

SUPER DUPER’s workout is eye-catching but the six-month lay-up could be her undoing in a stretch duel with race-fit SURE CURLIN.