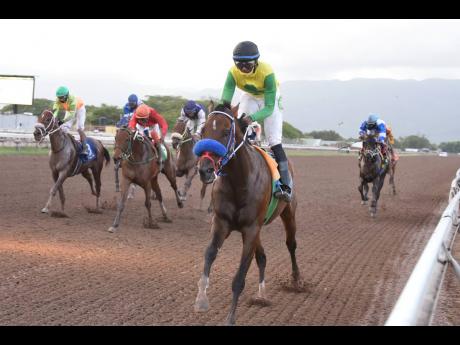 File
Father Patrick, with Omar Walker aboard, at Caymanas Park on Saturday, August 1, 2020.

TOPWEIGHT five-year-olds, DUKE and FATHER PATRICK, should duke it out in Monday’s six-furlong Lady Geeta Trophy - one enjoying his best days ever and the other indicating that a two-month lay-up might have been what the doctor ordered to restore lost form.

Since changing ownership by private treaty but still racing out of Gary Subratie’s barn, DUKE’s eye-popping transformation won him two open allowance sprints in March before his connections got overly ambitious and stretched out the bred-to-sprint Casual Trick-Lady Macbeth horse at a mile in the Viceroy Trophy.

Even though DUKE toted a featherweight 101lb, pundits knew better and ignored him at 14-1. DUKE ran as expected, leading for three and a half furlongs before pesky ROY ROGERS took over for a while, eventually giving way to the stablemates, ONEOFAKIND and NIPSTER.

Reverting to his favourite trip, DUKE ought to be the horse to beat, even with topweight 128lb, considering he ran down the likes of lightning-fast PATRIARCH at five and a half furlongs on March 6, clocking 1:05.4 on a heavy track and returned to humble course-specialist CAPTUREMYSHIP 24 days later, posting 58.2 at five furlongs straight.

However, a deeper look at the horses DUKE won against leaves a few questions to be answered. CAPTUREMYSHIP has not raced since and it took a drop in class for PATRIARCH to beat overnight allowance runners in the Easter Sprint Cup on March 14. After being caught by DUKE, PATRIARCH was similarly mowed down by importee SOLID APPROACH before plundering weaker rivals.

Having sat out what would have been an ideal race, the six-and-a-half furlong Saint Cecelia Trophy, run May 15, DUKE’s one-month absence could be cause for concern against FATHER PATRICK, who showed glimpses of regaining form last time out.

Old rivals FATHER PATRICK put it across DUKE on January 16 at six furlongs, both hunting their first open allowance win. An in-form FATHER PATRICK actually won the race under a hand ride from Oshane Nugent to tick off his second straight win, clocking 1:12.0.

However, when he returned seeking the hat-trick a month later, FATHER PATRICK ran a listless race as a 2-1 favourite at six and a half furlongs, finishing fifth behind TOONA CILIATA, who beat GOD OF LOVE and ENGLAND’S ROSE in a driving finish. The following month he again showed no speed, finishing next-to-last behind TOONA CILIATA, SENTIENT and CRIMSON in the Chairman’s Trophy.

Fresh off a two-month break on May 15, FATHER PATRICK chased TREVOR’S CHOICE into the lane at six and a half furlongs, both running SIR ALTON off his legs, before NIPSTER closed for the kill along the rail in the straight.

Busy at exercise and benefiting from Nugent’s claim, FATHER PATRICK comes in at 126lb, two lighter than DUKE, with the blow-out under his girth, signalling DUKE could be in trouble.