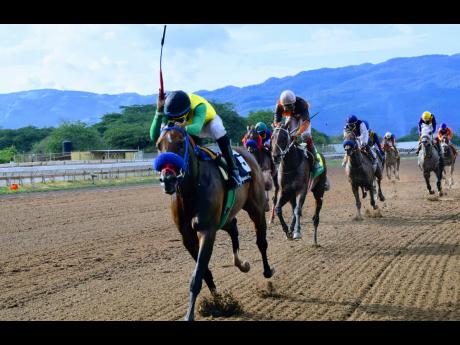 FATHER PATRICK chased DEEP BLUE SEA off the lead and ran away from EROY up the lane to easily win yesterday’s six-furlong Lady Geeta Trophy as the 7-5 favourite.

Reunited with Oshane Nugent, with whom he won back-to-back races in December and January, the five-year-old gelding provided the claiming jockey with his first winner since returning from a three-month injury break.

Reporting with 126lb due to Nugent’s four-pound claim, FATHER PATRICK broke sharply and soon outclassed DEEP BLUE SEA to take charge of the event, coasting into the lane in fast splits of 22.4 and 45.4, winning by two and three-quarter lengths in a time of 1:13.0.

Topweight DUKE, carrying 128lb, got caught along the rail from post-position one and was mobbed by quicker and lighter rivals, causing him to be shuffled back in the eight-horse field.

Meanwhile, another 7-5 favourite, GOD OF LOVE, similarly put away rivals in the closing event, disputing the lead with VICTORY TURN before skipping away to land the five-and-a-half furlong race in a quick 1:06.2.