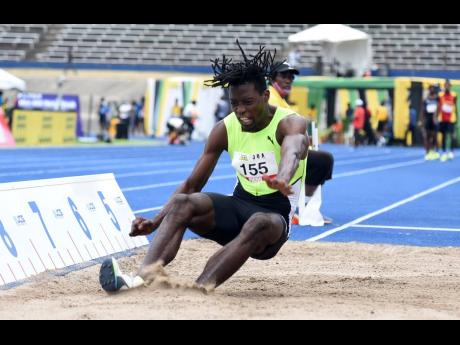 Kenyon Hemans/Photographer
Tajay Gayle wins the long jump competition at the JAAA/JOA Olympic Destiny Series meet at the National Stadium on Saturday, June 5 with a distance of 8.56m.

Tajay Gayle’s preparation for the Olympic Games in Japan next month appears to be going smoothly thus far. The World long jump champion produced impressive performances at the Miramar Invitational in Florida in April and the Olympic Destiny Series meet at the National Stadium on June 5.

However, all is not well as the 24-year-old is nursing a slight injury to his right knee which he hopes will heal before the Tokyo games.

Despite the injury, Gayle managed to post 8.27 metres to win the event at the Miramar Invitational. Then at the third Olympic Destiny Series meet, he delivered another strong performance, leaping 8.56m, to register a season’s best.

Though he insists the injury is not much of a bother, he is hoping to have it sorted out before he enters the Games on July 31, the date for the men’s long jump qualifying round.

“I am dealing with a knee injury that I am trying to fix,” Gayle told The Gleaner. “That is the only concern. Everything else is okay. I am taking time to deal with the injury while I continue to work on my speed,” noted Gayle who ran a 100 metres personal best of 10.18 a few weeks ago.

He said the injury first started affecting him at the Miramar meet but he performed through the pain.

However, because of the injury he has to undertake training with some level of caution and at times miss a day or two of training in order not further irritate it.

He also has to temper his run-ups during competitions. Although he is convinced a good rest could do the job, he does not want to miss a prolonged period of training.

“I don’t want that,” he insists. “I don’t want to miss a day. I have missed a couple of days but missing one or two days is nothing compared to missing a week, two weeks.

“Currently, I would not say it (injury) hinders me from my best performance but it is there, so it is a problem. It is the leg that I used to take off. So at any point in time I could take off and really hurt my knee,” he stated.

Because the right knee is sensitive, it forces him to adjust his take-off leg during competition and in training and this results in some scarring on the calf of his opposite leg.

His main concern now, however, is that the injury does not grow into something more serious over time.

“We are trying to work on it before it gets serious, because little injuries are sometimes what you have to worry about because they can become a big problem. So we have to get it out of the way and I am looking to sort it out now. But if it does not get better before the Olympics, we hope it does not get too severe,” he said.

Nevertheless, Gayle is looking to make the nation proud when he takes the field in Tokyo.

“I am just going there to do my best and make Jamaica proud. I am doing this for Jamaica and for the love we get from the country. So I am hoping to get the gold medal at the Olympics,” he added.