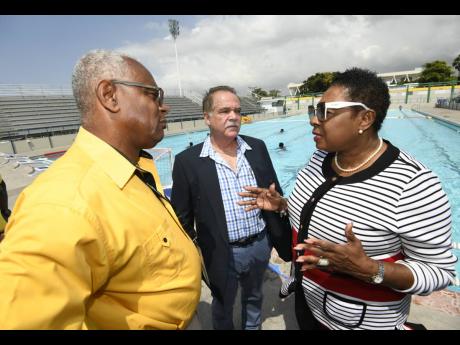 Sports Development Foundation (SDF) General Manager Denzil Wilks says that he is optimistic that the pumping system at the National Aquatic Centre (NAC) will be replaced by month-end.

Wilks confirmed yesterday that the foundation has identified and bought the pumps for the 50m swimming pool at the NAC as well as the diving pool. The Aquatic Sports Association of Jamaica (ASAJ) submitted a request last November for financial assistance in replacing the system which had experienced problems last year.

Sports Minister Olivia Grange announced the acquisition of the new system in her contribution to the June 8 Sectoral Debate in the House of Representatives.

“We are procuring a new pump for the pool at the NAC. It should be installed by the end of the month. In the meantime, we have hired divers to clean the pool so that our aquatic athletes are still able to use the facility,” Grange said.

With approval now granted for the replacement, Wilks said that he expects that the replacement will provide a permanent solution to the difficulties that the facility had experienced in the past.

“We have full approval now. Two pumps were purchased, one for the swimming pool and one for the diving pool. We are anticipating that this will significantly and positively impact the maintenance procedures of the pool,” Wilks told The Gleaner.

The system experienced problems last year because of a damaged gasket to which the SDF lent their assistance to complete the repairs at a cost of $300,000. Wilks disclosed that the total cost for two pumps is estimated to be close to US$28,000 (J$4.18million), which is almost double what was budgeted by the ASAJ (J$2 million) when they sent in the request for financial assistance last November. Wilks said that the investment was necessary for increased longevity of the system.

“We want to do everything now so that they can get a good run because these pieces of equipment really last long. Having changed the filters you want to get the pumps up to date,” Wilks said.

“We are glad the SDF was able to help us, especially during this pandemic, as our income has been very limited,” Brown said. “This will allow better circulation of the water through the filters and therefore, hopefully, we won’t get as many problems as we had.”

Brown said that until the new pumps arrive, more maintenance will have to be done by the ASAJ in ensuring the quality of the water is maintained as it is checked periodically by the Ministry of Health. When asked how the eventual replacement will affect potential local meets that could be in progress, Brown said that they are in discussions to determine a period where there is low activity to make the replacement.

“We haven’t worked out the details with the ASAJ but we will look at the time that the pool is used the least and do the (installation) then. Because right now they are in a hectic training period and we don’t want to affect that,” Brown said.

Local competitive swimming returned last month with time trials to determine qualification for regional tournaments such as the Central American and Caribbean Swimming Federation Swimming Championships to be held at the end of the month in Puerto Rico. The NAC has been reopened since last July for national and club training after a three-month closure because of the pandemic.