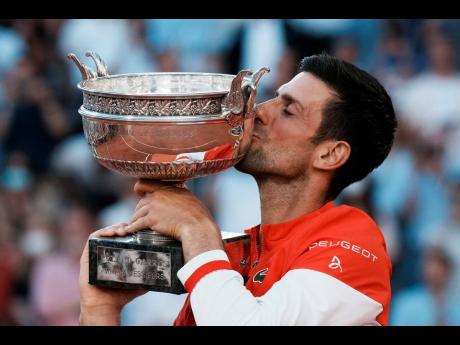 AP
Serbia’s Novak Djokovic kisses the cup after defeating Stefanos Tsitsipas of Greece in their final match of the French Open tennis tournament at the Roland Garros Stadium in Paris, France, yesterday.

Novak Djokovic left the court to go to the locker room for a little chat with himself after dropping the first two sets of the French Open final yesterday.

Part of him worried that he was too diminished and depleted to overcome that deficit against his younger, fresher foe, Stefanos Tsitsipas. And another part of Djokovic insisted he would.

Guess which side was right?

Aided by flawless serving down the stretch, a determined Djokovic summoned his imperious best and came all the way back to beat Tsitsipas 6-7 (6), 2-6, 6-3, 6-2, 6-4 for his second championship at Roland Garros and 19th Grand Slam title overall — one away from the men’s record shared by Roger Federer and Rafael Nadal.

“There’s always two voices inside: There is one telling you that you can’t do it, that it’s done, it’s finished. That voice was pretty strong after that second set,” Djokovic said. “So I felt that that was a time for me to actually vocalise the other voice and try to suppress the first one that was saying I can’t make it. I told myself I can do it. Encouraged myself. I strongly started to repeat that inside of my mind, tried to live it with my entire being.”

After ending the match with a leaping volley, Djokovic spread his arms, tapped his chest and crouched to touch the red clay at Court Philippe Chatrier. When he went to the sideline, he handed his racket to a boy in the stands he said had been offering advice throughout.

Once the third set was under way, Djokovic felt better and played better.

Yes, his triumph went from in danger to inevitable: Djokovic did not face a break point in any of the last three sets.

Djokovic became one of three men — alongside Rod Laver and Roy Emerson — to have won each major twice. As the reigning champion at the Australian Open and French Open, he heads to Wimbledon, which starts June 28, eyeing another rare achievement: He is halfway to joining Laver and Don Budge as the only men with a calendar-year Grand Slam.