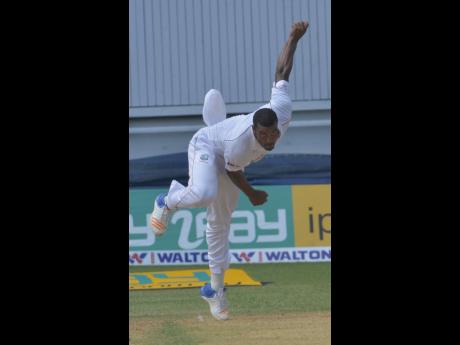 West Indies bowlers gave another resolute performance but South Africa held their own on the opening day of the second Test in St Lucia yesterday.

At stumps, the visitors, who were asked to take the first strike, reached 218 for five, with wicketkeeper Quinton de Kock not out on 59 and Wiaan Mulder on two.

The Proteas captain Dean Elgar led from the front with a top score of 77, as recalled pacer Shannon Gabriel is the pick of the bowlers so far with two for 47.

Things looked to favour the Windies after the toss that captain Kraigg Brathwaite won, as the visitors were in early trouble following some penetrative seam and swing bowling from the hosts’ pace quartet.

Gabriel got the early breakthrough in the second over of the match, as opener Aiden Markram slashed at one outside off stump and was caught at point by Roston Chase for nought, with only one run on the board.

Keegan Petersen joined Elgar and they navigated a torrid period where the ball beat the bat on several occasions, to the disbelief of the Windies pacemen.

Their persistence and discipline eventually bore fruit in the 11th over, as Jayden Seales combined with Jason Holder in the slips once again, to dismiss Petersen for seven, at 26 for two.

Elgar watched from the other end, but he found a useful partner in Kyle Verreynne, and they added 87 runs for the fourth wicket.

It took another short spell from Gabriel to break the resistance, as he had Verreynne caught behind for 27.

Elgar got to his 50 off 147 balls with six patient fours, as he and de Kock stuck in once again to frustrate the Windies bowlers by adding 79 runs for the fifth wicket.

Just as the visitors got over the 200 mark, part-time seamer Kyle Mayers found one that nipped back to hit Elgar’s stumps, dismissing him for 77 from a patient 237 balls with eight fours.

De Kock soon after brought up his 50 off 89 balls with five fours, as the visitors got to the close without further loss, to close on 218 for five.

Mayers, who has so far taken one for 24, says things are even so far.

“It was a good day out for both teams,” he said. “The wicket got better for batting as the day went on, so we will live with the five wickets down. But they are in a good position also with over 200 runs.”

A Markram c Chase b Gabriel 0

W Mulder not out 2