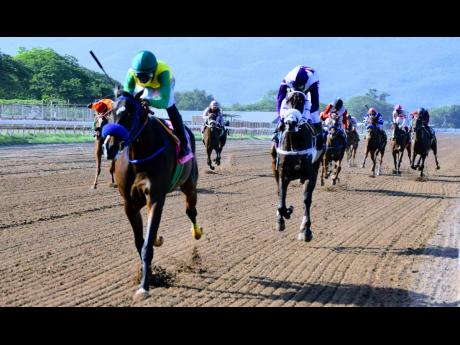 File
Big Jule (left), with Omar Walker aboard, in action at Caymanas Park on Monday, April 19.

Bred Tapizar-Blues In The Grass, BIG JULE reported without the blinkers which Parsard had fitted on May 22 when losing his bid for a second win from as many starts on May 22.

With no headgear and stretched out on the route course, BIG JULE was settled just off the pace in a trio behind leader IANNAILINKS before Omar Walker pressed gas at the half-mile marker.

BIG JULE peeled off and went farther in the stretch run to win by what seemed forever for the patrol camera to pick up PRINCE MARSHALL, 18 and three-quarter lengths away.

Division two was won in a pedestrian 2:03.2 by DADDY JONES, who rallied along the rail under a bustling ride from Bebeto Harvey to overhaul SANTORINI with Dick Cardenas.

HINDERED AT THE START

Parsard’s bid for a double in the feature was dashed when United States-bred AWESOME LIZ failed to stay the distance in division one after being hindered at the start then used up after running wide at the clubhouse turn.

Meanwhile, speedy MAHOGANY farcically landed the seventh event, returning from a near six-month lay-up, down two classes, to ensure a two-timer on the 10-race card for Parsard.

Dane Dawkins, who partnered MAHOGANY, won the previous event astride ENRAPTURE to share riding honours with Dane Nelson, who was aboard PURPLE WAYNE and COMMISSIONER, getting home ahead of the favourite, ADORATION, who stumbled badly at the off with Oneil Mullings in the third race.