McLeod hard to beat at Trials 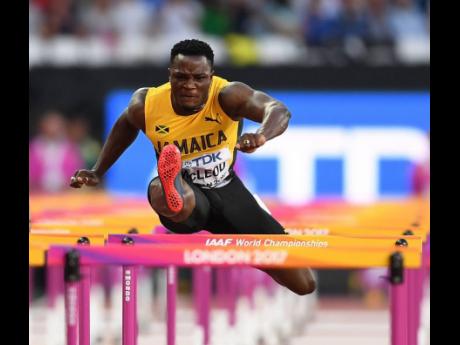 Omar McLeod is one of two world leaders that will be competing at the Jamaica Athletics Administrative Association National Senior Championships (Trials) this weekend as athletes look to book their tickets for the Tokyo Olympic Games next month....

Omar McLeod is one of two world leaders that will be competing at the Jamaica Athletics Administrative Association National Senior Championships (Trials) this weekend as athletes look to book their tickets for the Tokyo Olympic Games next month.

With a season’s best of 13.01 seconds, McLeod, the reigning Olympic champion and former world champion in the 110m hurdles, showed his excellent form recently in Italy to soar past then world leader Grant Holloway of the United States with his 13.07 seconds and jumped from his then season’s best of 13.08s.

McLeod, who last won the national title in the event in 2017 when he posted a national record and personal best of 12.90s, seemed to be hitting top form, but it will not be a cake-walk for him as in Rasheed Broadbell, he has a genuine threat here.

Broadbell, a bronze medallist in the Class One event at the 2019 ISSA/GraceKennedy Boys and Girls’ Athletics Championships, has moved from strength to strength in the event since his move to the MVP Track Club under the guidance of coach Stephen Francis.

With a season’s and personal best of 13.10s, Broadbell is ranked at number three on the World Athletics list and even led the list for several hours with that time.

He has shown that he has the early speed and also the finish to beat any quality field, and getting an early lead could put some pressure on McLeod, who tends to panic under pressure once he is not at the front.

It should be a battle royal for the third automatic spot for Tokyo as 2018 and 2019 champion Ronald Levy of MVP, Damion Thomas, Orlando Bennett, and Phillip Lemonious all look set for an intense duel.

With a season’s and personal best 13.22, Thomas, the 2018 Under-20 world champion, is the third-ranked Jamaican, but he will have to improve on his below-par performance at the NCAA Division 1 final, where a sluggish start saw him finishing at the back of the field.

Levy is slowly getting back into top form and will definitely improve on his season best 13.29s, while Bennett, with a season’s best 13.32s, and Lemonious, the NCAA Division 1 bronze medallist, with a season’s and personal best of 13.39s, will all be hoping to spring some surprises here.

However, it will be very hard to bet against a fit McLeod as he looks set to win and could go sub-13s for the first time this season.

Broadbell, in his first try at Trials, should finish second, with any number to play between Thomas and the rest for third.