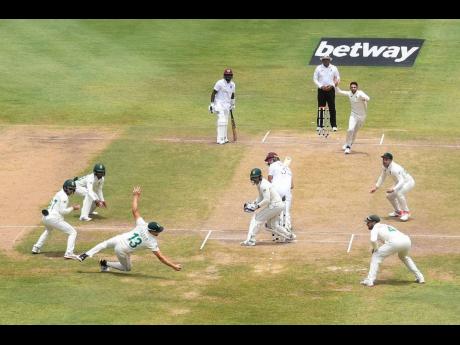 Despite a gritty half-century from opener Keiran Powell, the West Indies’ fragile batting proved costly once more with a Test defeat to South Africa yesterday.

The home side succumbed to some excellent spin bowling from Keshav Maharaj to go down by 158 runs on day four of the second Test in St Lucia, to lose the series 2-0.

The left-arm spinner became the second South African in Test to claim a rare hat-trick, as his five wickets saw the regional side bowled out for 164 in pursuit of 324 runs to win.

It was always going to be a daunting task for the Windies, who resumed the day on 15 without loss with Powell on nine and captain Kraigg Brathwaite on five.

Brathwaite added just one run to his overnight score before Man of the Match Kagiso Rabada started the demolition job by removing the skipper.

Rabada got another scalp with the score on 26 when he had Shai Hope fending at a rising delivery to slip for two.

Powell and Kyle Hope were determined to push back the South African onslaught, and the pair added 64 runs for the third wicket before Mayers was undone by Rabada for 34.

Powell, who brought up his fifty off 108 balls with nine fours, looked to push the scoring on, but instead, he held out in the deep off Maharaj to leave the hosts at 107 for four.

With Roston Chase unable to bat because of a quad strain, Jason Holder came to the crease, and he pushed the first ball he faced from Maharaj to bat-pad, to make it 107 for five.

Joshua Da Silva came in next to face the hat-trick ball, but he only succeeded in glancing it to leg slip, where Wiaan Mulder took a sharp diving catch to his right, to leave the West Indies at 107 for six.

Jermaine Blackwood, who witnessed the capitulation at the other end, found a useful partner in Kemar Roach, and the duo added 40 runs to put some respectability to the team’s total.

When Blackwood got to 25, Lungi Ngidi came to the party and induced the right-hander’s edge, which was gladly accepted behind the stumps by player of the series Quinton de Kock.

Roach played a few lusty blows and got to 27, but he became the fourth wicket for Maharaj with the score 158 for eight.

Maharaj then wrapped up the innings, as he had Jayden Seales caught for seven to seal an emphatic win for the visitors, who were claiming their first series win on the road in four years.

Brathwaite, while praising the bowling unit, apologised for the batting performance in the two-Test series.

S Gabriel not out 2