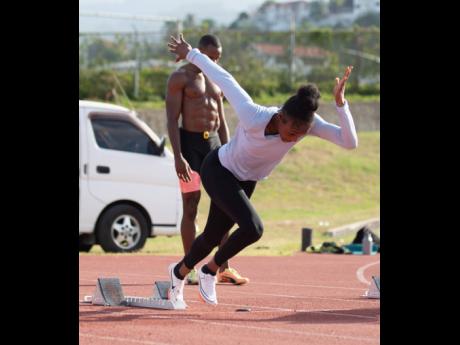 Legendary coach Stephen Francis has warned that sprinter Elaine Thompson Herah is in the best shape of her career, heading into the National Senior Championships, which gets under way inside the National Stadium today.

Thompson Herah, the reigning Olympic champion in the 100m and 200m, will contest both events at the championships and will arrive at the event unbeaten in the 100m this season from five starts, having achieved a season best of 10.78 seconds.

“Elaine always performs well at the Trials and from what I am seeing now, she is probably in as good a shape as she has ever been, which means that, based on all the evidence that we have seen so far, she is going to be very competitive,” Francis told The Gleaner.

Since 2015, Thompson Herah has never lost a final at the National Senior Championships. In fact, her only loss came in the 100m heats in 2018, when she finished second.

“Elaine, I am not sure I have ever seen her better, and hopefully the shoes will work for her as well,” Francis laughed, in reference to reignited debate around the influence of Nike’s new technology in spikes, which some have estimated could improve a sprinter’s time by over one-tenth of a second in the 100m.

Francis, however, underlined that the focus is to keep Thompson Herah healthy and focused on securing a top-three place and a ticket to the Tokyo Olympics.

“She is healthy at the moment and I think she wants to remain that way. I have told her repeatedly that the goal for the Trials is to make the top three in both events, because, ultimately, we have several athletes who lose to people at Trials and end up beating them at the Olympics or World Championships,” Francis shared.

“We still have a month after Trials, and we have some experience in making sure we improve at the big championships; so we are just trying to ensure that she is healthy, makes the team, and we take it from there,” he added.

In terms of her competition both locally and abroad, Francis is expecting Thompson Herah to push for top places in both sprints at Trials, and seemed to pour cold water on the exploits of American champion Sha’Carri Richardson, who clocked a wind-aided 10.64 seconds at the US Trials, en route to her 10.86 seconds clocking in the final.

“As the US Trials has shown, you have times, and you have times. A lot of the times that we are salivating about are heavily wind-assisted. They might be legal, but barely. One thing I can say, is that the times that are run at our Trials are replicated in Europe or when you go to the championships, so I am waiting with bated breath to see what all these people with these fast times can run (at the Olympics),” Francis said.

With her MVP stablemate Shericka Jackson, the multiple 400m medallist is said to be in exceptional form and entered in the 100m, 200m and 400m at Trials, and with sprint queen Shelly-Ann Fraser-Pryce leading the world this year with her national record mark of 10.63 seconds run, Francis is expecting a competitive contest this week.

“I believe that she (Thompson Herah) probably may be the only person who can challenge Shericka (Jackson) in the 200m, if she (Jackson) decides to run it; and I suspect she will. It will be a very close race between them, because they both have the endurance to finish. Shelly-Ann (Fraser-Pryce), I don’t know what she is doing about the 200m, but she should at least be good for the first 130-140m,” Francis stated.

Another MVP based athlete, Natasha Morrison, has also been in good form this season, having posted 10.87 seconds in Miami in April.