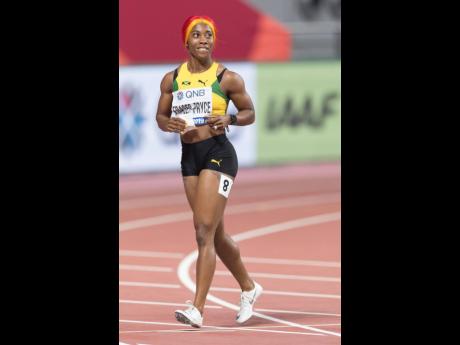 The final hurrah for some, the beginning of the road for others.

The island’s top athletes will fight for places at next month’s Tokyo Olympic Games, with the four-day National Senior Championships getting under way inside the National Stadium today.

Sprinting icon Veronica Campbell-Brown, who yesterday announced her retirement, and former 100m world record holder Asafa Powell, along with World Championships bronze medallist Nesta Carter, are among the missing stalwarts, with others such as Yohan Blake and Shelly-Ann Fraser-Pryce expected to be competing at their final Olympic Trials.

Yesterday’s initial announcement that approval had been granted for spectators to attend the championships was later withdrawn after it was determined that arrangements could not be put in place in time.

The Jamaica Athletics Administrative Association (JAAA) said it would not pursue the letter of no objection it had received from the Ministry of Health and Wellness for 5,600 spectators to attend the championship.

“After further review and consultation with government and non-government stakeholders, it was decided that all arrangements could not be implemented in time, hence spectators will not be allowed,” the JAAA said in a release last night.

Nevertheless, in addition to Jamaica’s long list of household names - Fraser-Pryce, Blake, Omar McLeod, Elaine Thompson, Danniel Thomas-Dodd, Danielle Williams, and Fedrick Dacres, the island’s new cohort of stars such as Briana Williams, Ackera Nugent, and Kemba Nelson will make some noise at the venue over the next few days.

While a lot of fireworks is expected at the meet, it should be a quiet start today, with the qualifying round of the Men’s 100 metres set for 9:30 a.m.

The top seven finishers will move forward to join the 25 seeded athletes that will contest the quarterfinals at 6:50 p.m.

Nigel Ellis enters the championship as the fastest Jamaican in the event this year with a best of 10.04 seconds clocking.

Ronda Whyte, 54.33, Janieve Russell, 54.75, and Shiann Salmon, 54.97, are expected to set the pace in this event, which will be missing 2019 World Championships bronze medal winner Rushell Clayton, who pulled out of the event because of injury.

The women’s 100 metres heats will face the starter at 6:35 p.m., and many will be looking forward to the first sightings of the island’s fastest women.

Three of the four fastest women in the world so far this season are Jamaicans, with world leader Fraser-Pryce, 10.63, leading the way, with Elaine Thompson Herah, 10.78, and Natasha Morrison, 10.87, sitting third and fourth, respectively, on the Top List.

Two other sub-11 seconds athletes - Williams, 10.97, and Nelson, 10.98 seconds, along with 400m World Championships and Olympics bronze medallist Shericka Jackson, who has a best of 11.02 seconds this year, guarantee a fiery showdown.

One final will be contested on today’s opening day, the Men’s Javelin, which is set for 3:30 p.m.