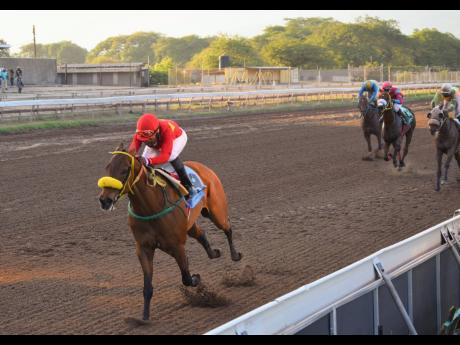 File
God of Love, with Dane Nelson aboard.

STABLEMATES PATRIARCH and GOD OF LOVE have the exacta locked in Saturday’s SVL 20th Anniversary Trophy with nary a horse in sight to separate them in the five-and-a-half furlong event for open allowance runners.

The weight allotment of 126lb has left the connections of DEEP BLUE SEA bawling, questioning the “handicapping” in what is really a condition event with all sorts of jingles and bells attached, except a proper system of rating horses’ performances.

Therefore, not even their best attempts of equalising the weight, calling in Jordan Barrett to slip seven pounds, will help DEEP BLUE SEA’s case (119lb), leaving the event at the mercy of Fitzgerald Richards’ PATRIARCH and back-to-form GOD OF LOVE, running at 117lb each.

Undoubtedly the quickest horse in the land, PATRIARCH who ripped 1:05.0 at the distance when last out on April 8, again gets the plumb draw, stall one, from which to blind rivals with speed in his regular sub-23 opening quarter.

By the time PATRIARCH reels off his regular 45.0, plus change, and ducks under the 58.0 radar for five furlongs, his connections can start making their way to the winners’ enclosure, unless they’re minded to watch GOD OF LOVE complete the exacta.

It only took GOD OF LOVE one run off a two-month lay-up to spank LABAN, the same horse who chased home MAHOGANY on Monday. Carrying 121lb, GOD OF LOVE won by five and a half lengths, clocking 1:06.2.

Returning with 117lb in a friendly line-up, GOD OF LOVE should easily close the exacta behind PATRIARCH.