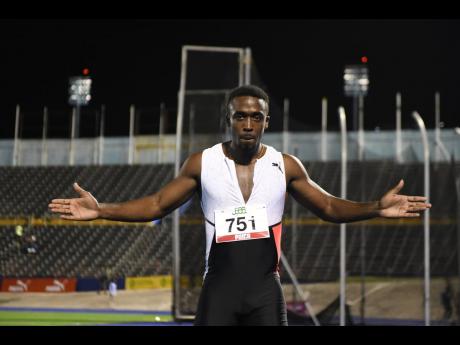 Gladstone Tayor
Tyquendo Tracey celebrates his win in the men’s 100 metres, ahead of Yohan Blake (second) and Oblique Seville, at the JAAA National Senior and Junior Championships at the National Stadium last night. Tracey won the event in 10.00 seconds. 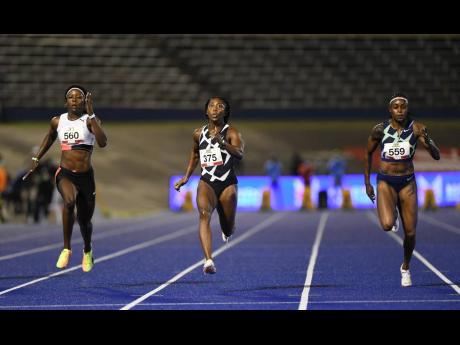 In what can truly be described as one of the greatest ever women’s 100 metres finals at the JAAA National Senior Championships, world leader and the fastest woman alive, Shelly-Ann Fraser-Pryce, ran a blistering race from start to finish to win the National title in 10.71 seconds at the National Stadium last night.

Fraser-Pryce was off to her usual good start as Elaine Thompson-Herah was left in the blocks and despite staggering at the start, Shericka Jackson, the surprise package, who ran a personal best 10.77 seconds in the semi-finals ran back strongly to finish second in 10.82. Thompson-Herah was third in 10.84 seconds.

The National women’s title was Fraser-Pryce’s first since 2015 while Thompson was seeking a fifth straight victory in the event.

After the race Fraser-Pryce hailed her rivals.

“I must give credit to all the ladies who showed up tonight because every time we have a National Championships you just have to be ready. I think it speaks volumes about the depth we have and how mentally tough the ladies are,” Fraser-Pryce said. It was a blanket finish in the men’s 100 metres as it took the photo finish camera to decide the top three spots as Tyquendo Tracy (10.00) surprised 2011 World champion Yohan Blake who was second in 10.01. The vastly improved Oblique Seville of Racers Track Club flew at the end to finish third in a personal best 10.04. Seville’s previous best, 10.08, came in the preliminary rounds on Thursday. Janieve Russell and Jaheel Hyde were impressive winners in the women’s and men’s 400 metres hurdles, respectively.

In the women’s event, Commonwealth Games champion Russell of MVP Track Club surprised pre-race favourite Ronda Whyte of SprinTec Track Club as she won easily in a season’s best 54.07 seconds, well below her previous best of 54.75. Whyte, the 2017 National champion, was second in 54.94 as overseas-based Leah Nugent took third in 54.98.

Two-time World Under-20 400 metres hurdles champion Hyde is now in his best form ever. The Swept Track Club athlete took the lead early and maintained it to the end, winning in a personal best 48.18 seconds. Shawn Rowe of GW Express was second in 49.60 with third going to 2019 champion, Kemar Mowatt, in 49.61.

Yesterday also saw first round action in the men’s 400 metres where Christopher Taylor emerged the fastest qualifier going into today’s semi-finals slated for 6:05 p.m. Competing in heat two, the former Calabar High standout from the Florida-based Tumbleweed Track Club won in 45.99 seconds. SprinTec’s Demish Gaye, the 2019 champion, is the second fastest qualifier after winning his heat in 46.08. Other heat winners were Sean Bailey of University of Texas El Paso, 46.29, Rusheen McDonald of MVP Track Club, 46.67, and Karayme Bartley (47.03) of Texas Tech University.

In field events there was a big upset in the women’ s discus as Samantha Hall of Thrower R Us, with a winning throw of 62.94 metres, surprised favourite and Olympic qualifier Shadae Lawrence who was second with 61.42m. Shanice Love of Florida State University closed out the top three after finishing third with 58.80 metres.