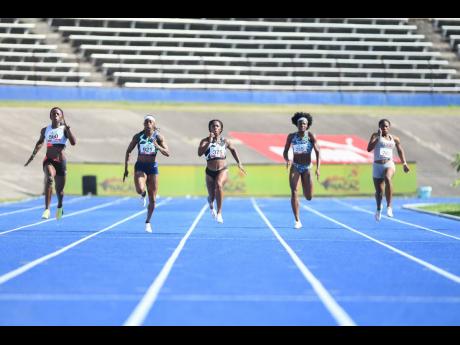 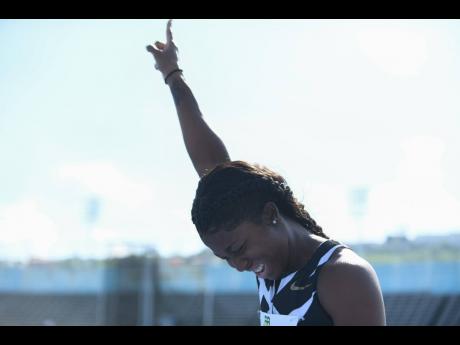 Yesterday’s final day of competition of the National Senior Championships at the National Stadium ended on a high, with Shelly-Ann Fraser-Pryce stealing the show with a personal best (PB) of 21.79 seconds in the women’s 200m to close out her sprint-double success.

Like the 100m finals on Friday, expectation was high for another titanic battle in the half-lap event as Fraser-Pryce and second- and third-place finishers Shericka Jackson and Elaine Thompson Herah, respectively, all won their semi-finals with ease.

Fraser-Pryce, with her usual brilliant start, took the early lead coming off the curve in front of the field. Both Thompson Herah and Jackson challenged strongly with less than 50m to go, but Fraser-Pryce, whose top-end speed has improved significantly this season, pulled away for the win and her first sub-22s clocking. Jackson, who finished strongly, also produced a first sub-22s time of 21.82 seconds while Thompson Herah had to settle for third in 22.02s.

“God is good,” Fraser-Pryce said after the race. “Faith and purpose is a hell of a thing, and the combination does work as I have never doubted myself, and everything has to do with time and patience, which allowed me to go sub-22s for the first time, and massive, massive big-up to my coach, Reynaldo Walcott.”

Rasheed Dwyer of SprinTec Track Club, the 2014 Commonwealth Games 200m champion, took the men’s event in 20.17s, ahead of a fading Yohan Blake (20.18s) as both athletes attained the Olympic qualifying standard. Tyquendo Tracey, the 100m champion, was third in 20.34s. Julian Forte, who led after the curve, did not finish because of an injury.

The meet started off with two upsets in the men’s and women’s sprint hurdles, where two of the country’s favoured athletes for medals in Tokyo prior to yesterday will have to watch the meet from home.

In the first event, the women’s 100m hurdles, all eyes were on Britany Anderson of Tumbleweed Track Club and Danielle Williams of adidas, the two fastest Jamaicans in the event so far this season. However, former national champion Megan Tapper, the sixth-fastest Jamaican, with a season’s best (SB) of 12.87s, stole the show. Running out of Lane Eight, she flew over the latter part of the race to win and lower her SB to 12.68s. Yanique Thompson, of SprinTec, came into the Championships at 11th best this season with 13.09s. She lowered that SB to 12.73s in her semi-final and then equalled that time for second yesterday. Pre-race favourite, Anderson, the number-one Jamaican in the event this season with 12.58s, was third in 12.75s. Williams, the second-fastest Jamaican this season with 12.65s, could only manage fourth in 12.79s.

Olympic champion Omar McLeod of Tumbleweed Track Club, the World number two in the men’s 110m hurdles with 13.01s, was the favourite to win after being unbeaten all season. However, everything went wrong for him after hitting the first hurdle, and he never recovered as MVP Track Club’s Ronald Levy and Louisiana State University’s Damion Thomas and Hansle Parchment went toe-to-toe from hurdle eight. Levy clocked an SB 13.10 seconds for the win as Thomas finished second in a PB of 13.16s and Parchment, after a long lay-off due to injury, finished third in an SB 13.16s. McLeod was last.

This result will be headache for the selection committee as the country’s number two, Rasheed Broadbell, missed the meet after getting a medical exemption due to injury. It will have implications for whether Parchment makes the team for Tokyo.

“The rules are there in black and white, and we will be guided by this,” a member of the selection committee told The Gleaner.

The Women’s 400 metres produced an outstanding result as several of the athletes logged PBs, with the first two going sub-50s for the first time.

MVP’s Stephenie-Ann McPherson won in 49.61s ahead of the vastly improved Candice McLeod of University of The West Indies, second in 49.91s. Roneisha McGregor of Puma clocked 50.02s for third and Stacey Ann Williams of the University of Texas, Austin, was fourth in a PB 50.14s.

The country’s number one men’s quarter-miler this season, Sean Bailey of the University of Texas, El Paso, won the men’s event in 45.04. Christopher Taylor of Tumbleweed Track Club was second in 45.13s, with Karayme Bartley of Texas Tech University third in 45.17s.