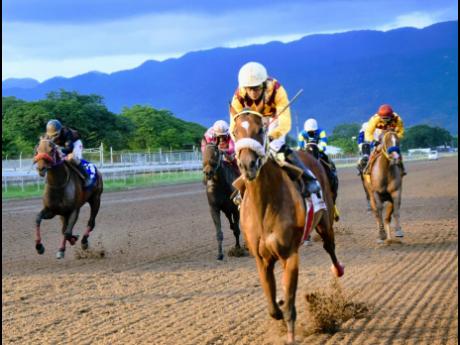 EL PROFESOR dropped an 8-1 bomb in yesterday’s Awesome Power Trophy, a non-restricted overnight allowance, swooping down on EROY and DOUBLE CROWN, turning for home along the rail, before exploding for a three and three-quarter length victory at seven and a half furlongs.

An even third behind out-of-class MAHOGANY and LABAN last Monday at odds of 99-1 when going six furlongs, EL PROFESOR fell on EROY and DOUBLE CROWN like a ton of bricks entering the straight.

Used up in a duel on the lead, EROY and DOUBLE CROWN dropped arms when Tevin Foster pounced with six-year-old EL PROFESOR, who benefited from the match race between the two topweights, winning in a decent 1:31.3.

EROY finished next-to-last, again showing his displeasure of being tested on the lead, appearing a shadow of the horse he was last October when clocking 1:37.0 at a mile.

EL PROFESOR was among a flurry of upsetters, which started rattling the 10-race card from the fourth event when INNOVATOR made all to silence punters at 31-1, staying on stubbornly under claiming jockey Youville Pinnock at six and a half furlongs.

Jason DaCosta’s pair of GENTLE GIANT and MIDNIGHT BLUE both struck at 5-1 for owner Carlton Watson in the sixth and ninth races, respectively.

Anthony Thomas (54) moved seven clear of Dane Nelson (47) in the jockeys’ standings, closing his two-timer with MIDNIGHT BLUE after landing the second event aboard STORM PRINCESS.

Racing continues on Saturday with the 10-furlong Jamaica St Leger as the feature event in which the likes of 2000 Guineas winner, MINIATURE MAN, and nemesis FURTHER AND BEYOND will lock horns.