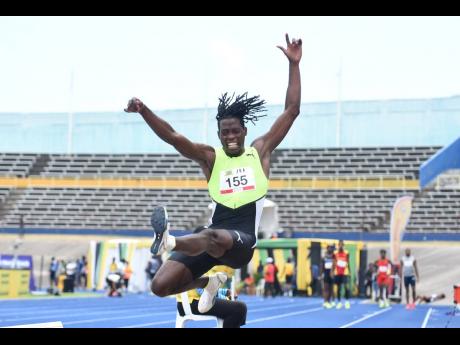 World Championships long jump gold medallist, Tajay Gayle, will be one of eight Jamaicans who will compete in tomorrow’s Wanda Diamond League in Stockholm.

Gayle, who will be the first Jamaican in action at 8 am (Ja time), will take on the outstanding Juan Miguel Echevarria of Cuba. Gayle has a season’s best of 8.27m while Echevarria has a 2021 best of 8.38m.

Two of the Jamaica’s medallists in field events at the 2019 Doha World Championships, Fedrick Dacres and Danniel Thomas Dodd will also be in action. Dacres, the silver medallist in the men’s discus, will be hoping to make up for his mid-week disappointment in Oslo where he finished sixth in the event. He will again face the winner and runner-up at that meet, Daniel Stahl of Sweden and Kristjan Ceh of Slovenia, the top-two throwers in the event so far this season. Also in the event is Andrius Gudzius of Lithuania who has a season’s best of 68.62m.

Thomas Dodd, who has a season’s best of 19.26m in the shot put, will be hoping for a big improvement going into the Tokyo Olympics. The field will include the likes of four-time World Champion Valerie Adams of New Zealand with a season’s best 19.65 metres, along with Portugal’s Auriol Dongmo (19.75m) and Aliona Dubitskaya of Belarus (19.65). New sprint star Shericka Jackson will lead Jamaica’s charge on the track as she is down to contest the 200 metres. With a personal best of 21.82 seconds at the recent National Championships she is the only sub 22 seconds athlete in the field which includes Marie-Josée Ta Lou of Cote d’Ivoire, a 100m bronze medallist at the Doha World Championships, and Morolake Akinosun of the United States.

After her fifth-place finish in the women’s 400 metres hurdles in Oslo, Jamaica’s Leah Nugent will be joined by National Champion Janieve Russell in the event. Femke Bol of the Netherlands, who won in Oslo along with second-place finisher Anna Ryzhykova of the Ukraine and the fastest athlete in the field, Shamier Little of the United States, with a season’s best 53.12 seconds, will all face the starter.

JAMAICANS DOWN TO COMPETE: