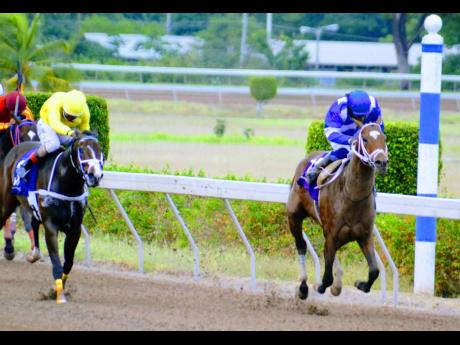 File
TREVOR’S CHOICE (left) placing second to NIPSTER in the Saint Cecelia Cup on May 15 at Caymanas Park.

TREVOR’S CHOICE tried to steal a march at six and a half furlongs on last but his 46-1 coup was quashed by NIPSTER, who mowed him down to land the Saint Cecelia Cup. Though he has had no luck at five furlongs straight, one mishap after another, should TREVOR’S CHOICE report in similar form, the Charles Hussey Trophy should be his for the taking on Monday.

Among TREVOR’S CHOICE’s foes on the lead in the Saint Cecelia Cup were SIR ALTON and FATHER PATRICK, both of whom he turned back in sharp splits of 34.3, 46.3 and 58.2, but was unable to stave off down-in-class NIPSTER, who came charging to make amends for his miss in the Viceroy Trophy.

Now down in class, having last won six months ago, TREVOR’S CHOICE ought to be the horse to beat though not the best drawn with a possibility of him wanting to run down to the inner rail from post-position four.

TREVOR’s CHOICE’s connections haven’t made it any easier, insisting on carrying the burdensome topweight, ignoring many capable claiming riders, who would have been able to float to mid-track, eyeballing suspect course specialists SALVATION and CAPTUREMYSHIP.

SALVATION is a quick filly but she won’t enjoy an unmolested lead in this field as she did when hanging on to beat TASK FORCE at the distance on last.

CAPTUREMYSHIP returns from a three-month lay-up lightly trained as usual. He was cut down by DUKE at the distance when last out on March 30. He shares topweight but gets a great draw. However, he is up against in-form runners and might need the outing to get back in top shape.

LABAN ran his best race in ages, alert at the start, to chase home MAHOGANY at six furlongs on last. He galloped 1:00.2 from the gate Wednesday morning and has a good draw from which to charge at rivals. From a clean break, he has a solid chance, especially at 115lb.

Another closer to keep an eye on is UNIVERSAL BOSS. The versatile five-year-old was scratched out of his intended race on June 26. Ignore his finishing position behind MAHOGANY. He was prominent early in the event. In addition, he was second a furlong out behind GOD OF LOVE in his previous event. He has good finishing speed. The choice of rider suggests he is primed for a big effort.