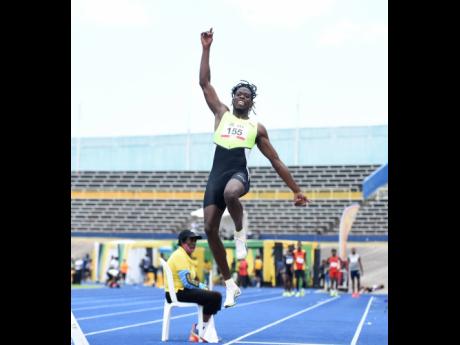 There were also top-three finishes for Natoya Goule and Kemar Mowatt.

It has now become a norm for Gayle to deliver on his final attempt. Like he did in Doha, Qatar, to snatch gold, and at the National Senior Championships (Trials) recently to win the event, he produced his best performance with his final attempt, with a winning mark of 8.55m, where he was aided by a positive wind speed of 2.3m per second. It was also his season’s best (SB).

Cuba’s Juan Miguel Echevarría, who led after his first attempt, had to settle for second with 8.29m, while Sweden’s Thobias Montler of Sweden took third in a personal best (PB) 8.23m.

Gayle was surprised to have jumped that distance.

“I am very pleased, and this was just a reminder for the future that I can get into those regions where I was and even better,” he said after the meet.

Fresh off her heroics at Trials, where she was a second-place finisher in the Women’s 100m and 200m, Jackson scored a resounding win in the half-lap event. Despite being in second place for the majority of the way, behind the fast-starting Marie-Josée Ta Lou of the Ivory Coast, Jackson found top gear in the final 50m to win, going away in 22.10 seconds. Ta Lou was second in an SB 22.36s, while Namibia’s Beatrice Masilingi, who was recently barred by World Athletics from competing in the 400m because of having high natural testosterone levels, was third in a national record (NR) of 22.65s.

Despite a gallant effort, national champion Natoya Goule had to settle for second in the women’s 800m. Goule was involved in a stirring final home-stretch run with leader Rose Mary Almanza of Cuba, who held on for a close win in a meet record and PB 1:56.28 minutes, ahead of Goule, who clocked an SB of 1:56.44 minutes, while United States of America’s (USA) Kate Grace took third in a PB 1:57.36 minutes.

Mowatt ran an SB of 48.75s for a third-place finish in the men’s 400m hurdles. Brazil’s Alison dos Santos won in a PB and area record of 47.34s, with Turkey’s Yasmani Copello finishing second in an SB 48.19s. British Virgin Island’s Kyron McMaster, the early leader, did not finish after a fall.

Four other Jamaicans at the meet, Janieve Russell, Leah Nugent, Danniel Thomas-Dodd, and Fedrick Dacres, finished outside of the top three.

Russell had to settle for fourth in the women’s 400m hurdles in 54.08s and Nugent sixth in 55.01s as the top three finishers ended under 53s. World number two, Femke Bol of the Netherlands, won in 52.37 seconds, which was a national, Diamond League and meet record. USA’s Shamier Little was second in a PB 52.39s, while it was also an NR of 52.96 seconds for third-place finisher Anna Ryzhykova of Ukraine.

Both Thomas-Dodd and Dacres were seventh in their respective events. Thomas-Dodd had a heave of 18.59m in the women’s shot put won by Valerie Adams of New Zealand with 19.26m. Dacres had a distance of 63.57m in the men’s discus throw, won by world champion and world leader Daniel Ståhl, of Sweden, with 68.64 metres.

There was also another Caribbean success on the day as Grenada’s Kirani James captured the men’s 400 metres in 44.63 seconds, and Trinidad and Tobago’s Deon Lendore was second in an SB 44.73s.