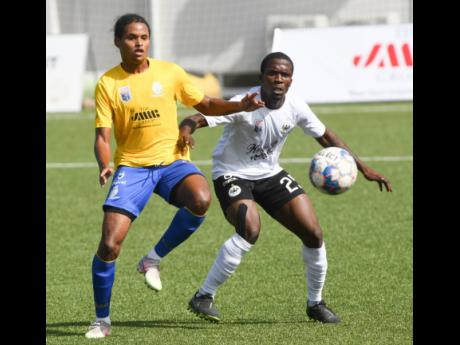 Cavalier head coach David Laylor said his team should have bagged all three points from their second Jamaica Premier League (JPL) game of the season against Harbour View at the UWI/JFF/Captain Horace Burrell Centre of Excellence yesterday.

Cavalier had majority of the chances in both halves of the match, but could not make the most of them.

“We got a lot of chances to put this game away, but at the end of the day, we had to settle for a 1-1 draw,” Laylor said after the game. “Discipline played a big role in us drawing the game today. We could have won the game from the first half with a little more patience and more discipline, but the guys were excited. They played the first game and felt good about it and come this second game, we were too individualistic and that is why we drew. We could have done much better. So we will work on the mental side, going forward.

“We know we will continue to create goals, but we have to work on finishing and composure in front of goal, so we just have to do some work in that department. And the work is more about head (thinking) than football. So it is to work on the mental side and discipline of these youngsters. They are young and we have to be patient with them. But, not taking anything away from the Harbour View team, I believe we could have done better. We just have to go back to the drawing board and come again.”

Cavalier took the lead 12 minutes into the game, when Bryan English lobbed Tafari Chambers in the Harbour View goal to give his team a bright start. Captain Kamoy Simpson, Dwayne Atkinson, and Shaneil Thomas then all wasted good chances to add to Cavalier’s lead before half-time.

Kyle Ming and Thomas were denied at point-blank range after the break. However, they were soon made to pay for their misses as 12 minutes into the second half, Chong latched on to a pass inside the box, and his deflected strike eventually found its way into the net.

However, Cavalier continued to create good chances, and Simpson should have restored their lead but he put a sitter over the bar from 12 yards out six minutes from the end. Cavalier pressed on for the winner but Atkinson and Courtney Allen could not find a way past Chambers with two good chances late on.

Three points would have made Cavalier sole leaders with maximum six points. But they now share the top of the table with Mount Pleasant on four points. Harbour View have two points from their two matches.