Any number can play

Women’s 400m anyone’s for the taking in Tokyo 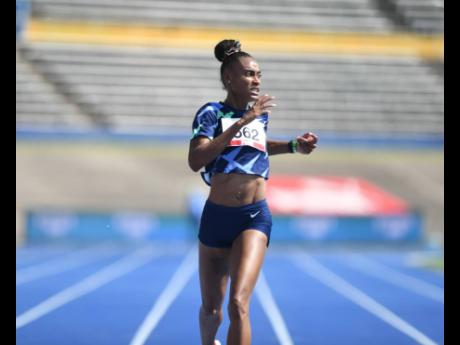 Gladstone Taylor/Multimedia Photo Edito
Stephenie-Ann McPherson looks to the clock as she crosses the line in the women’s 400m final at the National Senior Championships at the National Stadium on Sunday, June 27.

Jamaica’s women have never won a global 400m title at the senior level. The nation’s only glory came at the junior level when Tiffany James-Rose took gold at the World Athletics Under-20 Championships in Bydgoszcz, Poland, in 2016. The country will...

Jamaica’s women have never won a global 400m title at the senior level. The nation’s only glory came at the junior level when Tiffany James-Rose took gold at the World Athletics Under-20 Championships in Bydgoszcz, Poland, in 2016.

The country will be well represented in the event in Tokyo as Stephenie Ann McPherson and first-time Olympians Candice McLeod and Roneisha McGregor will be hoping to create history. All three have strong chances to be among the medals and one could go all the way.

Unlike in former years, this summer, there are no clear favourites for gold because of the debacle in the women 400m where several of the leading lights this year will be absent from the event.

The Bahamas’ Shaunae Miller-Uibo, Salwa Eid Naser of Bahrain, and Jamaica’s Shericka Jackson, the three medallists at the World Athletics Championships in Doha, Qatar, in 2019, will not contest the event. To add to this, the Namibian duo of Christine Mboma, the world leader with 48.54 seconds, and Beatrice Masilingi, ranked at third with 49.53s, are also out.

Miller-Uibo has pulled out of the one-lap event due to scheduling as the timing between the 200 and 400m events means she will find difficulty resting and preparing, so she has opted for the 200m instead.

Eid Naser, the World champion, has been banned for two years after the Court of Arbitration for Sport banned her for two years for a whereabouts violation.

The Namibians are out after World Athletics conducted medical assessments on them at their training camp in Italy, and found that both have high natural testosterone levels.

With the latest saga, McPherson, with a personal best 49.61s done in winning at the recent National Senior Championships (Trials), will be the number one ranked athlete going to Tokyo in the event. McLeod and McGregor, with personal bests of 49.91s and 50.02s, respectively, done finishing second and third at Trials, will be the third and joint fifth best going to the Games. This is because McGregor and the United States of America’s Allyson Felix, a former Olympic champion, have the same time.

At 32 years old, could this be the moment for the consistent McPherson to go all the way and write her name in the history books? She won a bronze medal in the event at the World Athletics Championships in Moscow, Russia, in 2013. The MVP Track Club athlete also finished sixth at the Rio Olympic Games in 2016, then London World Championships in 2017, and Doha 2019. Following her recent good form, this could be the moment for her to do something very special.

The Americans, led by Quanera Hayes, who is just behind McPherson at second with her season’s best 49.78s, and Felix should not be taken for granted.

McPherson, with her vast experience, could be the one for Jamaica but McLeod, who seems to get better and better after every run, could do something very special in her Olympic debut in an event in which any number can play.