‘Hungary’ for a win 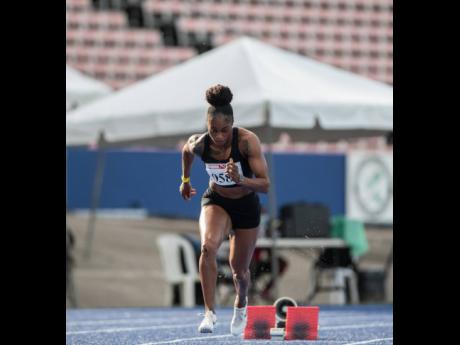 Thompson-Herah made a statement, finishing ahead of former MVP Track Club teammate, Shelly-Ann Fraser-Pryce, the fastest woman in the world this year. Fraser-Pryce had defeated Thompson-Herah in both the 100 and 200m sprints at the National Senior Championships (Trials) over a week ago.

In what was possibly one of her best starts, Thompson-Herah was right there at the 40m mark with fast starting Fraser-Pryce before showing composure to pull away from her rival. She clocked 10.71 seconds in the event, .01 off her personal best to exact her revenge.

Fraser-Pryce clocked 10.82s for second with the Ivory Coast’s Marie-Josée Ta Lou third in 10.86s. Natasha Morrison, the other Jamaican in the event, was seventh in 11.24s.

It was a good day for MVP Track Club athletes, now at their training camp in Italy, as Shericka Jackson and Stephenie Ann McPherson picked up wins in their events. There were top three finishes for Janieve Russell and the Julian Robinson-coached discus thrower Fedrick Dacres.

The in-form Jackson, coming off a good win two days earlier at the Stockholm leg of the Wanda Diamond League, recorded another sub-22 seconds in the 200m for a win, getting the better of one of the favourites for the gold in Tokyo, the Bahamas’ Shaunae Miller-Uibo, clocking 21.96s. Unlike Sunday, when she waited for the latter part of the race to take the lead, this time she came off the curve in front before pulling away for the win as Miller-Uibo, running her first 200m for the season, was second in 22.15s. Former World champion Dafne Schippers, of the Netherlands, was third in 22.70s.

McPherson made it back-to-back sub-50 seconds in the 400m. After posting her personal best of 49.61s at Trials to be the top ranked female athlete in the event going to the Olympics, she followed up that good form with another win, clocking 49.99s. The United States’ Wadeline Jonathas (50.70s), and the Netherlands’ Lieke Klaver (51.23s) finished second and third, respectively.

National 400m hurdles champion Janieve Russell posted a season’s best 53.68s in the women’s 400m hurdles but had to settle for third. In a repeat of their finish two days earlier in Stockholm, European champion Femke Bol (52.81s), of the Netherlands, scored a very close win over the United States’ (US) Shamier Little (52.85s), who had to settle for second.

World Athletics Championships discus silver medallist Dacres bounced back from his seventh-place finish in Stockholm to finish third in the men’s discus throw with a heave of 65.08m.

National 400m record holder Rusheen McDonald was seventh in the event in 46.79. Here the Bahamas’ Steven Gardiner won in 44.47s as the US duo of Bryce Deadmon (44.58s), and Michael Norman (44.65s) had to settle for second and third, respectively.