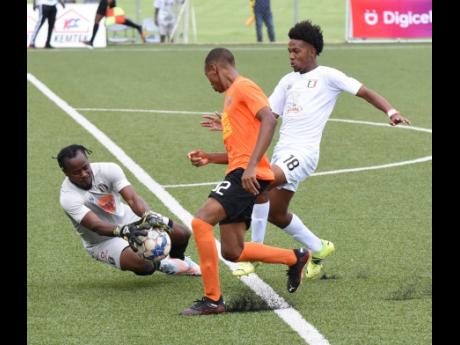 Substitute Devroy Grey nodded home the winner in the 67th minute after being set up by another substitute, Romaine Bowers. Williams says that they were not getting what they required from the strikers and that resulted in him pulling Earon Elliott and Davion Garrison at the start of the second half for the duo.

“That was pre-planned in terms of what we wanted to do, and the characteristics of the players we put on in terms of their dynamism,” Williams told The Gleaner after the game. “It was just the decisiveness to get into the box. We weren’t getting that from the forwards (Elliott and Garrison) we started.

“They were holding up the play well but there was no decisive movement from those two. The two players we put on, we knew they were eager to get into the box and the goal came from their decisiveness and willingness. It worked for us today and hopefully we can get it right for the other matches to come.”

Williams said the objective was three points, and despite achieving their aim, he believes his team has much work to do on their finishing and in the final third.

“We are definitely pleased we were able to keep them off the scoresheet,” Williams said. It (defence) is an area we have been working on for the last few weeks, but in terms of how we look in the final third, and in front of goal, it is something we have to work on. We haven’t really reached that level as yet, but it is a work in progress and that is the aim we will be working on in the coming weeks and you will see more goals from us.”

Tivoli had the first real chance eight minutes into the game but Jermaine Johnson’s free kick was pushed away for a corner by Arnett goalkeeper Chadeem Rodrigues.

Elliott and Garrison then had good chances as well, but Arnett responded with chances of their own that fell to Hardley Barnes, who first fired wide in the 26th minute, before his redirected effort was blocked at point-blank range minutes later. Luca Kung also blasted a good chance over the bar from 18 yards out moments after.

Tivoli also created a number of openings towards the end of the half but could not take advantage, and Trevaune McKain should have given Tivoli the lead when he blasted over the goal from eight yards out on the half-hour mark.

However, minutes later, Tivoli made the breakthrough.

Tivoli moved to four points, the same as leaders Cavalier and Mount Pleasant.