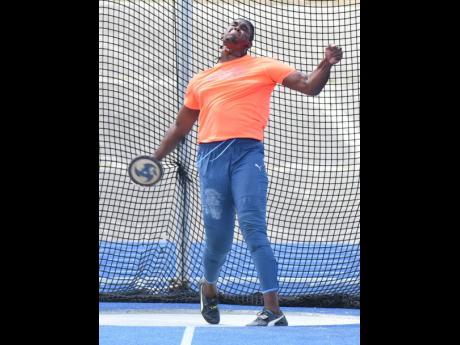 Fedrick Dacres says his performances in the discus throw over the last week have been disheartening. Dacres, 27, underwent surgery earlier this year for a torn ligament in his left hand and says his recovery is preventing him from executing his...

Fedrick Dacres says his performances in the discus throw over the last week have been disheartening.

Dacres, 27, underwent surgery earlier this year for a torn ligament in his left hand and says his recovery is preventing him from executing his best throw.

He admitted that initially, he did not take the issue too seriously as he was convinced that he could work around it.

However, his recent performances at the Oslo and Stockholm Wanda Diamond League meets and at the Gyulai István Memorial in Hungary on Tuesday helped him to realise that the situation needs serious attention.

“The throws that I am doing now are my lower-level throws,” Dacres told The Gleaner. “So it is disheartening even though I know my situation.

“I always want to be better, so it doesn’t make anything better.”

In Oslo, Dacres produced 62.60m to finished sixth. Three days later, he threw 63.57m for seventh at the Stockholm meet although in Hungary on Tuesday, he managed to improve his distance to 65.08m to take third place.

However, throughout the week, he struggled to control involuntary movement and stiffness in his hand and fingers, and this affected his ability to execute his best throw.

“Because of the whole injury situation, I have had problems all season, but I was comfortable getting in one or two throws, but I realised that I hadn’t had a good throw all season,” he said.

“Coming to the trials, it got worse. I was getting more muscular and the tendons started to pull more in my hand, so there were involuntary movements in my fingers as they would twitch.

For the Stockholm meet, he got the help of a physiotherapist, but the improvement was minor.

“My warm-ups were really good, but when the competition started, the same thing started to happen again but a little less because I was keeping it warm, and I ended up with 63m.

“Moving to the Hungary meet, I did the regular warm-ups and stretching, but I started to pay more attention to the hand because I thought it was okay, but it actually wasn’t.

Dacres, who has his sights set on adding the Olympic gold to his World Athletics Championship silver medal, Pan American Games gold, Commonwealth Games gold, NACAC and Continental Cup gold medals, says he will focus on getting his hand completely fixed when he returns to the island in order to be in his best condition to challenge for gold in Tokyo.