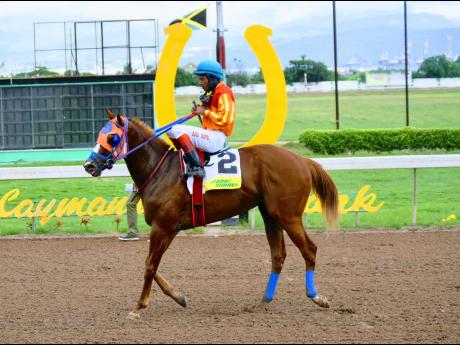 AFTER running his heart out in the seven-furlong Prince Consort Stakes, getting within a half-length of FURTHER AND BEYOND, turning the tables on CALCULUS who had beaten him in the shorter Sir Howard Stakes, BILLY WHIZZ’ inside draw and level weight never allowed him to repeat his heroics in either the Kingston or 2000 Guineas

However, reporting for the Knutsford Park Cup at 114lb after bypassing last Saturday’s 10-furlong St Leger, BILLY WHIZZ has never been this light in nine starts, spelling trouble for his 10 rivals after six furlongs in 1:13.3 at exercise on a good track.

Dick Cardenas has been called in to replace Anthony Thomas, who instead has the leg up on Gary Griffiths’ REGAL AND ROYAL. Griffiths’ charge ran as good as BILLY WHIZZ in the 2000 Guineas after his big third-place effort behind MINIATURE MAN and FURTHER AND BEYOND’s dead-heat in the Kingston.

Ignore REGAL AND ROYAL’s last run without blinkers, at nine furlongs and 25 yards, behind BIG JULE. With blinkers refitted and reverting to sprinting, he’s a dangerous contender. However, BILLY WHIZZ had put it across REGAL AND ROYAL at six furlongs as two-year-olds in December, suggesting he is a better sprinter.

Speed will be critical with the likes of TAURUS BOY, SIMBA THE LION and AWESOME LIZ all expected to be involved in the early fractions, which explains Cardenas being summoned to rate BILLY WHIZZ.

United States-bred TAURUS BOY tried to spring a fast one on his return from a four-month lay-up on last. He had the benefit of a good draw and finished fourth behind GENTLE GIANT, KING’S MAGICIAN and BATON ROUGE at five furlongs straight.

The Philip Feanny-trained foreigner had developed a tardy habit at the gate prior to going off but was always prominent on last, suggesting he could be over his issues. However, the fact that he continues to train mainly out the straight says otherwise. Nevertheless, he could be a threat on the lead, even from a bad break.

SIMBA THE LION ran as well as his pedigree allowed him in Saturday’s St Leger, disputing the early fractions. Returning rather early, he’s back sprinting but has run smack into classic-placed BILLY WHIZZ, who has had daggers drawn, awaiting this event.

AWESOME LIZ has ability but gets herself into too many tangles at the start of races, no matter the distance, which will cost her dearly in a six-furlong sprint.