‘Not leaving without a medal’ 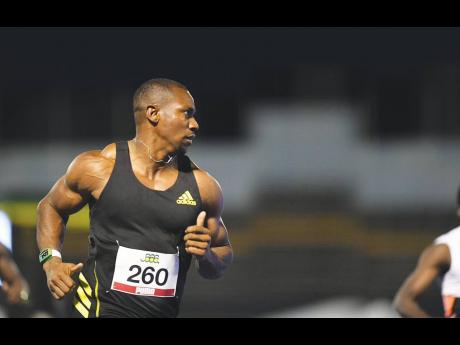 Yohan Blake produced his best form in almost two years to improve Jamaican expectations in men’s sprinting at the upcoming Tokyo Olympics, when winning the 100m in a season’s best 9.95 seconds at the America Track League track and field athletics...

Yohan Blake produced his best form in almost two years to improve Jamaican expectations in men’s sprinting at the upcoming Tokyo Olympics, when winning the 100m in a season’s best 9.95 seconds at the America Track League track and field athletics meeting in Atlanta, United States, on Friday night.

Following his victory, a confident Blake, who won double silver in the 100 and 200m at the 2012 London Games, stated his readiness for Tokyo.

He said: “This is my final Olympic Games and I am not leaving without a medal.”

Blake is the youngest-ever 100m World Championships gold medallist after claiming the title in 2011, and the second-fastest man ever with a career best 9.69s clocking in Lausanne, Switzerland, in August 2012. However, prior to winning in Atlanta on Friday night, his fastest time was recorded in June 2019 – a 9.96s clocking at the National Stadium in Kingston.

Acknowledging his form and fans, Blake reacted on Twitter, posting: “Let’s do this YB family! Continuing to build up to the Tokyo Olympics with a season’s best of 9.95. Feeling good. BeastMode*#tokyo2021.” – Yohan Blake@YohanBlake

In another Twitter post, Blake added: “Remember to only allow the highest, most positive, abundant, intelligent, loving, clean thoughts in your mind and take control of your success today YB Fam! Have a great day” – Yohan Blake@YohanBlake.

The fastest Jamaican male sprinter this year, Blake got an impressive start, literally flying out of the blocks and capitalised to build a healthy lead on his opponents, before easing up close to the finish line for a comfortable win.

Two other Jamaican athletes notched wins at the event, sprint hurdler Danielle Williams, and Ronda Whyte in the 400m hurdles.

Williams, the 2015 World champion who missed out on a spot on the Olympic team after a fourth-place finish at the National Championships, logged an impressive season’s best, 12.62s, to take the win in the women’s 100m hurdles ahead of Tobi Amusan, 12.71s, of Nigeria, and Great Britain’s Tiffany Porter, who took third in 12.88s.

In the same event, Jamaica’s Olympic-bound Yanique Thompson failed to reach the finals after finishing fourth in her heat in 13.30s.

Whyte, who also booked her ticket to the Olympics, closed off the Jamaican triple on the night for Jamaica by winning the women’s one-lap hurdles in 54.47s Melissa Gonzales of Colombia took second in 55.45s, while third went to Sparkle McKnight of Trinidad and Tobago in 55.62s.

Three other Jamaicans who are headed to the Olympics, Candice McLeod, Rasheed Dwyer, and Hansle Parchment, plus Andre Clarke, logged top-three finishes.

McLeod, runner-up at the National Championships, was second in the 400m in 51.11 s. Jessica Beard of the United States won the race in 51.51s. Three other Jamaicans who competed in the same event, Tovea Jenkins, 52.19s, Anastasia Le-Roy, 52.35s, and Tiffany James-Rose, 52.88s, placed fifth, seventh and ninth overall.

Parchment ended second in the men’s 110m hurdles in 13.32s. Michael Dickson of the United States took the win in 13.23s.

The other Jamaican competitor at the meet, Olympic-bound Demish Gaye, struggled in the men’s 400m after finishing fifth in 46.13s. The US’s Wil London won in 45.08s ahead of Trinidad and Tobago’s Machel Cedenio, who was timed at 45.34s.