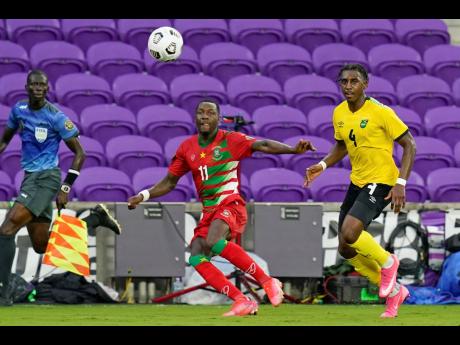 AP
Jamaica full back Amari’i Bell (right) looks on as Suriname forward Sheraldo Becker whips in a cross during the second half of their Concacaf Gold Cup Group C match in Orlando, Florida, yesterday. The Reggae Boyz won the game 2-0.

Nathan Jones, the manager of English Football League (EFL) Championship side Luton Town, has complained about the timing of the Concacaf Gold Cup after recent summer signing Amari’i Bell was named in the Jamaica squad for the tournament.

Bell became one of Jones’ six summer signings, and although he knew of the possible call-up of the player, he says it will give him very little time to work with the player going into the new season.

“I’m not happy about it,” Jones told Luton Today. “How anyone starts a tournament in mid-July is crazy, absolutely bonkers because it affects the British game, as there are a lot of players because of where it is, based in the States.

“It doesn’t hinder us too much, it just means that we won’t get him for the training.”

Jones says that although the player will get good match practice and fitness, it will not be with his side.

“God willing, he will get fit and get match practice, but it won’t be with us and that is the only time (available) because it is really key now,” he said.

“He has done fantastically well in the four days we had him and we are looking forward to working with him.”

The 27-year-old Bell has three caps for Jamaica after appearances against USA in March and Serbia in June and against Suriname in their 2-0 win in Group C of the Gold Cup last night.

Should Jamaica make it all the way to the final, Bell will be not available to his club until Monday, August 2, only five days ahead of the Championship season.