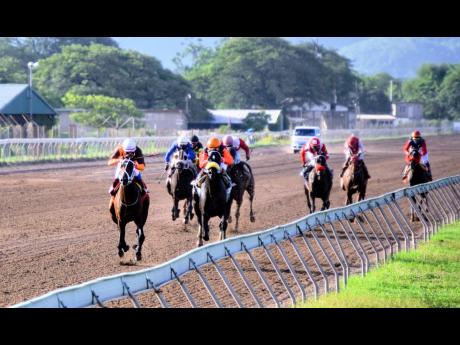 EROY took over from HARRY’S TRAIN three furlongs out and turned back LEGALITY in the straight, reversing the form of his previous run, to score a two-length win in yesterday’s overnight allowance at nine furlongs and 25 yards.

After meekly surrendering to EL PROFESSOR and finishing down the track at seven and a half furlongs two weeks ago, finishing behind DEJAE’S BOY and UNCLE FRANK, EROY returned to turn the tables with a convincing victory at odds of 3-1.

Cheap-speed HARRY’S TRAIN offered no resistance when Anthony Thomas attacked with EROY. LEGALITY was ridden to give chase entering the straight but was safely held by EROY, who clocked 1:56.2.

BIG BIG DADDY closed for third whereas his stablemate, ONE DON, broke slow and never got going in the eight-horse field, a contrasting run after two strong victories on the trot.

EROY was the first of back-to-back winners for leading rider Anthony Thomas, who closed the nine-race card with an easy win astride short-priced favourite FEARLESS CHAMPION, extending his lead to 11 over Dane Nelson.

Monday racing takes a break for the remainder of the month, Saturday meets only, resuming Emancipation Day, August 2, as part of Super-4 Week, four meets in eight days, which kicks off Saturday, July 31.

Super-4 Week is completed by the Jamaica Derby on Independence Day, Friday, August 6, followed by a Saturday meet.