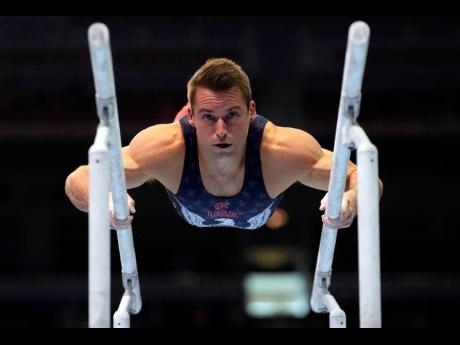 AP
Sam Mikulak competes on the parallel bars during the men’s US Olympic Gymnastics Trials in St Louis, Missouri, on Saturday, June 26.

Sam Mikulak felt frantic. The American gymnast had his training disrupted by COVID-19, and the Tokyo Olympics were postponed until 2021.

That unease stayed with Mikulak for a while, and it led him to confront all the ways the perfectionism of gymnastics had affected the rest of his life.

“I’ve had to, like, change my whole circuit ... of just how to find appreciation in the imperfect,” he said. “And those are the types of things that have really made me a lot happier now. But it was a very hard and dark time to go through to get there. And quarantine was the only time that I’ve ever had in my life where I could actually go through that process.”

On the eve of the Tokyo Games, it is clear that just arriving at this point for some of the world’s greatest athletes was more of a mental-health challenge than it was a physical one.

The COVID-19 postponement altered years of training plans,and the uncertain landscape amid the ongoing pandemic only added to lingering anxiety. The murder of George Floyd by Minneapolis police in May 2020 sparked a worldwide reckoning with racism that also weighed heavily on Black athletes.

“This last year for the Black community has been brutal,” swimmer Simone Manuel said during the US swim trials, acknowledging after a loss that she had been diagnosed with overtraining syndrome – or burnout – in March and needed to take a three-week break from training.

Preparing for Tokyo during the pandemic was particularly challenging for Ginny Fuchs, an American boxer who uses her schedule to help her deal with her obsessive-compulsive disorder.

Ashleigh Gentle, a 30-year-old triathlete from Australia, took a break after the world was locked down due to COVID-19. She worked on renovating her Brisbane house with her partner, ultra marathoner Josh Amberger.

But Gentle’s family lives on the Gold Coast south of Brisbane, and she felt their absence.

“Of course, I was also very worried and concerned for them,” she said. “We weren’t able to travel any more than 50 kilometres (30 miles) from home, so seeing them was off-limits. That was tough.”

Olympic athletes have more options than ever before when it comes to mental-health support, especially those with the biggest federations. Beyond the heightened conditions brought on by the pandemic, it is about addressing the needs of a generation of athletes more comfortable with seeking help.

David Hughes, the chief medical officer for the Australian Institute of Sport and the country’s Tokyo contingent, said their athletes will have access to “on-the-ground psychology services” during the Games and online services if the athlete has a relationship with a psychologist. It already has emergency-support structures in place.

The US offers similar support for its athletes, including a mental health support line that receives about eight calls per week on average and support groups organised around particular topics. It runs a mental health registry of vetted providers, and it recently started mental health assessments.