Get up off your knees! 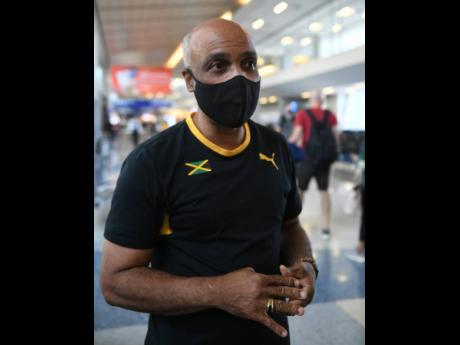 Gladstone Taylor
Jamaica Olympic Association President Christopher Samuda in an interview with The Gleaner at the Dallas Fort Worth International Airport in the United States of America yesterday.

President of the Jamaica Olympic Association (JOA) Christopher Samuda has welcomed the decision by the International Olympic Committee to relax its position on athlete activism at the Tokyo 2020 Olympic Games. He, however, encourages that the...

President of the Jamaica Olympic Association (JOA) Christopher Samuda has welcomed the decision by the International Olympic Committee to relax its position on athlete activism at the Tokyo 2020 Olympic Games.

He, however, encourages that the conversation stay focused on ensuring tangible results and noted the need for athletes to continue to lend their voices to the efforts to secure social change.

The IOC recently released guidelines for athletes who wish to use the platform of the Games to express their views at specific periods, a reversal of previous warnings that athletes would be banned from the event for protests and political messaging.

“The position of the board of directors of the JOA is that you have to respect the right to protest. I term it as the ‘Rights Revolution,” Samuda told The Gleaner.

“We have been on our knees for centuries, for one reason or the other, and those of us who know history know exactly why we were on our knees. We need to rise from our knees in a very structured way and ensure that the protests determine results so that 10 years from now, we are not still talking about being on our knees,” Samuda added.

The IOC’s controversial Rule 50, which prohibits “demonstration or political, religious, or racial propaganda” and speaks to other restrictions, has been at the centre of debate for years and has been cast into sharp focus ahead of these Games given the swell of advocacy against racial and social injustices across the globe.

Samuda warned that this new licence of expression must be utilised in a structured and effective manner to ensure that the Games is not placed at risk.

“In terms of protests at the Games, we have to be very careful. We respect the right to protest, but that has to be organised in such a way that it does not place the Games at risk ... . You have to ensure that your financiers do not feel that their capital is at risk, but what we need to do is get up off our knees,” Samuda shared.

“So I support, at the Olympic Games, fora that will be established and organised, where athletes can, in fact, articulate and express their views in a very organised manner, but you have to have results, you must have outcomes. It cannot be protestation and then you exude energy and go home and the status quo remains the same,” Samuda continued before speaking directly to Rule 50 and the need for greater athlete inclusion in the Olympics charter.

He pointed to the need to include athletes at the decision-making level as a key deliverable and believes that this will provide important opportunities and representation for sportsmen and sportswomen.

“There is an athlete representative on the IOC board, and the IOC Charter, in terms of its language, is very supportive of athletes, but then now we want to move to another level and have athletes on all commissions because at that level, you will have policymaking,” Samuda said.

Samuda was scheduled to arrive in Tokyo early this morning ahead of tomorrow morning’s (Jamaica time) Opening Ceremony for the July 23 - August 8 Games.