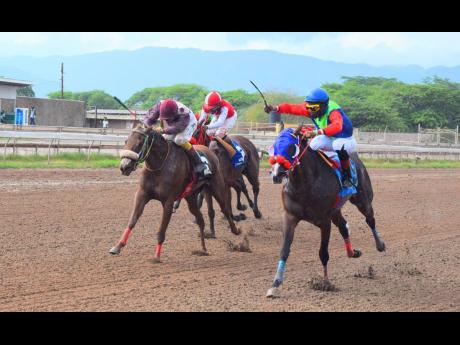 File
She’s A Wonder (right), ridden by Reyan Lewis, wins the Portmore Cup at Caymanas Park on Saturday, May 1.

Ian Parsard’s 1000 Guineas winner and St Leger second runner-up, SHE’S A WONDER, appears headed to face colts and geldings in the $7.5 million Betmakers Jamaica Derby on Independence Day, Friday, August 6, as opposed to the fillies-only Jamaica Oaks for half the purse the following afternoon.

A winner of five races from 10 starts, SHE’S A WONDER outclassed fillies in three consecutive events – the Thornbird Stakes, Portmore and 1000 Guineas – before finishing third behind colts, upset-winner CALCULUS, and FURTHER AND BEYOND, in the 10-furlong Jamaica St Leger on July 3.

Parsard said yesterday that he is sure of which of the events he would want the speedy filly to tackle but her owners, some of whom also have shared interests in another of his runners, BIG JULE, are monitoring his recovery from a setback before making a call.

“My mind is made up in terms of where I think she should run but her overall connections are still weighing the options. The final decision will be influenced by BIG JULE’s readiness because a number of the connections are common to both horses,” he explained.

BIG JULE, who has won two of three starts, including an impressive 18-length victory at nine furlongs and 25 yards on June 21, had bypassed the July 3 St Leger with sights set on another route race as his derby prep last Saturday.

However, the Tapizar-Blues In The Grass offspring was scratched from the event with what Parsard described as “a sudden illness”, which has left him with inadequate time to prepare for the 12-furlong derby.

“I would say the chances of him being ready for the derby is much less than 50 per cent right now. It’s touch and go, literally, day by day,” Parsard said of BIG JULE’s chances of making the derby.

“He went into his last race fine. He came out of the race with a minor niggle. As a result we decided to bypass the St Leger in preference for the derby. That niggle was basically 100 per cent taken care of, from what we could see, but Saturday’s race would have provided important answers but he seemed to have come down with a sudden illness.

“So far, he has responded well to rest. He was able to trot yesterday. That went as fine as we would have expected it and he did a canter this morning with no complaints but he still has a tall, uphill battle to get physically ready for a 12-furlong contest.”

That leaves Parsard and his connections to decide whether a bird in hand is worth two in the bush – have SHE’S A WONDER use her class to scoop the 10-furlong Oaks worth $3.75 million or go for broke against colts and geldings in the $7.5 million Jamaica Derby.

“I think she has the ability to run in either one and be very competitive. She has an excellent chance of winning wherever she goes,” he said, debunking the fact that her 1000 Guineas-winning time was two seconds slower than the 1:39.3 clocked by MINIATURE MAN in the 2000 Guineas.

“I am a lot less concerned about the Guineas times than before the St Leger, reason being she raced against the best of the colts in the St Leger (and finished third). I thought the events at the starting gate in the St Leger did not do her justice at all. I believe she was at a distinct disadvantage. She stood in the gate for five minutes and 20 seconds whereas a number of other contenders were backed out and stood for four and 25 seconds, respectively.

“This resulted in her scrambling from the gate and caught in last position. That, unfortunately, threw off her young rider and bad decisions were made. Nevertheless, she ran third, close to the second-place horse. With all of that, I am not concerned about the Guineas time. What we’re concerned about is, of course, 12 furlongs, which none has gone before. I believe from a level break SHE’S A WONDER would be a live candidate for the derby if we, in fact, go there,” Parsard pointed out, confirming that Reyan Lewis will again be entrusted with the classy filly.