No regrets for Alia 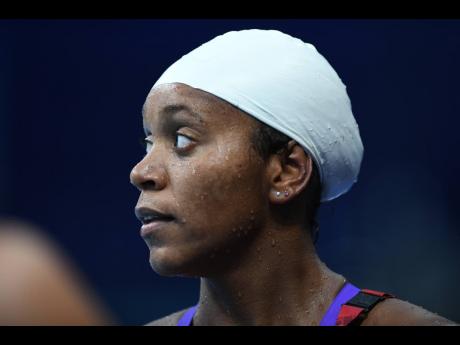 Gladstone Taylor
Jamaica’s Alia Atkinson after competing in the Women’s 100m Breaststroke event at the Olympic Games in Tokyo, Japan, on Sunday.

TOKYO, Japan: Jamaican swimming star Alia Atkinson rued the absence of spectators at the Tokyo 2020 and believes that not winning a medal at the Olympic Games over her career does not change her legacy in the sport. Atkinson yesterday failed to...

Jamaican swimming star Alia Atkinson rued the absence of spectators at the Tokyo 2020 and believes that not winning a medal at the Olympic Games over her career does not change her legacy in the sport.

Atkinson yesterday failed to advance to the semi-finals of the Women’s 100m Breaststroke event at the Tokyo Aquatics Park and later announced that she would retire from the sport at the end of the current season.

“I don’t think not winning any medals at the Olympics changes anything for me. I don’t know if it’s just the maturity at the Games, but today, especially, without spectators, it really just looked like a competition. It was weird. It didn’t have that excitement in the air, so I think because of that, it felt like an age-group meet,” Atkinson said before underlining that she would never trade any of her World Championships medals or world records for an Olympic medal.

“I don’t think so because if I were to do that, to me, it makes the gratitude of everything I have accomplished go to waste. The work that I have put in, it shows up more in short course for sure, but just the excitement and all the things that have happened, I can’t change them for nothing, but that world record and world title, it impacted more than I think an Olympic medal would have,” said Atkinson.

Out in the heats

In Tokyo, Atkinson led during the early stages of the race but could not hold on for the win or one of the best-16 times, which would have taken her into the next round. In the end, she touched the wall in third position with a time of 1:07.70, with Lithuania’s Kotryna Teterevkova taking the win in 1:06.82 ahead of second-place finisher Anna Elendt, 1:06.96, from Germany.

Atkinson admitted that the lack of spectators also played a part in the energy inside the pool.

“It has to affect you. It’s like watching a basketball game where you don’t hear the crowd pushing you on, and you don’t get that extra push from them, so I am sure there is something there, but for me in the long run, not that much. You can’t really hear them in the water anyway,” Atkinson laughed.

Atkinson, who became the first black woman to win a World Championships gold medal when she first did so in 2014, lists earning the respect of the sport and its stakeholders as one of her greatest accomplishments in her career.

“I think it was all the people I met. Growing up in Jamaica, swimming and then being an introvert and getting to this stage and having world records and swimming with these people and being among them and getting their respect is something I have earned over the years. So I think that is my greatest achievement - my teammates, people on the pool deck, officials, and so on,” Atkinson said before noting the appreciation of her role in the sport over the past few years.

“I mean I try to do what I can do, and I think it does help with my impact. Really, I try to make other people more comfortable in the sport. It’s simple things like talking to a swimmer who might be nervous. Maybe it’s their first international meet or their first time swimming in a 50m pool. It’s things like that I know that I do that may have had an impact on others,” Atkinson noted before outlining her plans for the future.

“My children’s books, I really want to put my time into that and see if that’s something I can venture into. I have never really had the time to actually sit down and do it and put work into it, but that’s what I want to do,” she said.