‘It was really special’ 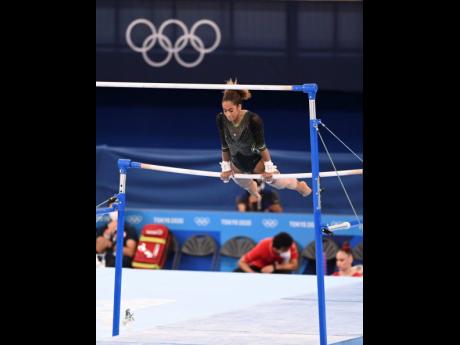 Gladstone Taylor
An injured Danusia Francis, with her left leg strapped, competes in the artistic gymnastic event at the Tokyo 2020 Olympics in the Ariake Gymnastics Centre, Tokyo, Japan, on Sunday. 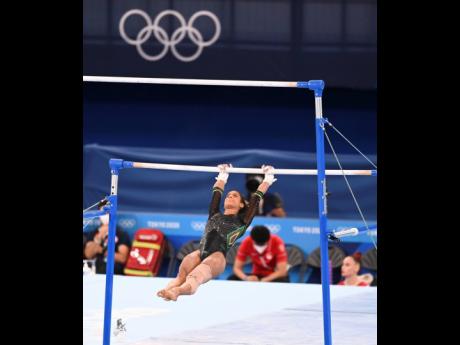 Gladstone Taylor
Jamaica’s Danusia Francis, with her left foot strapped, competes in the artistic gymnastic event at the Tokyo 2020 Olympics, in the Ariake Gymnastics Centre, Tokyo, Japan, on Sunday. Francis competed despite suffering from an ACL injury.
1
2

TOKYO, Japan: It was not the spectacle she was hoping to produce, but for Jamaican gymnast Danusia Francis, 11 seconds and a few skills on the lower bar, during the artistic gymnastics competition inside the Ariake Gymnastics Centre at the Tokyo...

It was not the spectacle she was hoping to produce, but for Jamaican gymnast Danusia Francis, 11 seconds and a few skills on the lower bar, during the artistic gymnastics competition inside the Ariake Gymnastics Centre at the Tokyo 2020 Olympic Games on Sunday, was the fulfilment of a lifelong dream – and a couple of nightmares along the way.

In a true embodiment of the ‘Olympic Spirit’, Francis fought back the pain to mount the uneven bars, just a few days after tearing her anterior cruciate ligament (ACL) and losing any chance of even attempting her full routine in the competition.

However, having missed out on the London 2012 and Rio 2016 Olympic Games, Francis was determined to finally mark the register and officially secure her place as an Olympian, in the process ensuring that for two consecutive Games, Jamaica had representation in the sport at the highest level.

“It has really been an emotional roller coaster these last few days trying to figure out how much I can do and what I can do. I really did the bare minimum, but now, to be able to call myself an Olympian and say Jamaica was represented in gymnastics at two Olympics is really something special, so I am just going to hold on to these positive feelings,” said a beaming Francis, as she hobbled along following her applause-triggering dismount.

You will probably never see a greater show of appreciation for the person who finished last in an event.

Francis lost 6.5 points for infractions, and given the straight-forward nature of her double rotation skill, she only received a 0.5 difficulty score from the judges.

Incidentally, her 9.033 execution score ranked her in the top spot on any apparatus.

“It was really special and I just think that no one can take this away from me now, I am an Olympian. Jamaica has had back-to-back representation in two Olympics, so hopefully we can keep that going now,” she beamed.

“Today that was such an easy (routine), we have been doing that for years and years, since I was like seven years old, so there was zero risk for me. I just wanted to do it to get a score on the board to be able to say that I have done the Olympics,” Francis added.

Being an Olympian is forever and that is something that Francis has been chasing for the majority of her 27 years on the earth.

She started in the sport at age six and rose through the British youth ranks before going on to win senior medals while representing Great Britain.

In 2012, she was well on course to make the British team after strong showings in the first two qualifiers, before a poor performance in the third and deciding competition saw her being named only as an alternate for Great Britain at the 2012 Games, which was taking place just two hours down the road from her home town of Coventry in the United Kingdom.

In 2015, after changing her colours to Jamaica’s black, green and gold, Francis earned the island a place in the 2016 Rio Olympics test event. The spot was eventually handed to Toni-Ann Williams, who became Jamaica’s first Olympics gymnast.

After earning her spot to Tokyo 2020 from the 2019 World Championships, it again appeared that she would lose the opportunity to compete under the five rings after finding out about her torn left ACL on Friday.

Dream secured, Francis says she will be doing some consultation and research before deciding on the next course of action for her injury.

“I would need to have surgery. I will do a bit of research to know that I am getting the best possible option when it comes to surgery that’s going to enable me to carry on my training afterwards; and I will take my rehab very seriously and, hopefully, I will be back next year for the Commonwealth Games,” she said.

“I want to say a massive thank you to everyone back home. Even before my injury was so public, people were just saying that they were proud of me for being here and since the news of the injury came out, the support has been overwhelming; so I’m so sorry I couldn’t put on the show I wanted to, but I hope I made you proud, and I hope to continue to make you proud in the future,” added Francis.