‘We just didn’t make use of our chances’ 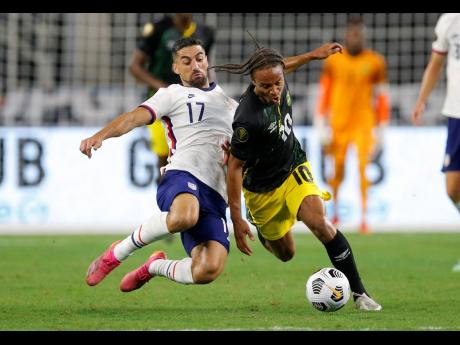 NATIONAL SENIOR men’s football team head coach, Theodore ‘Tappa’ Whitmore, said the team lacked presence in the opponents’ penalty box to put away the many missed chances that ultimately led to their exit from the CONCACAF Gold Cup on Sunday.

The Reggae Boyz were defeated 1-0 by the United States of America in their quarter-final game at the AT&T Stadium in Arlington, Texas. Matthew Hoppe scored for the Americans at the 83rd minute, heading in at the back post off a cross from substitute Cristian Roldan.

Despite what has been described as a disappointing tournament for a team that finished runners-up in 2015 and 2017, coach Whitmore said there are positives.

“The signs are promising going into the World Cup qualifiers. With what we have we know we will need additional reinforcement. We needed some presence in the opponents’ 18-yard box. We didn’t play bad, contrary to what people are saying. We just didn’t make use of our chances and in these critical moments of international football we have to turn half-chances into real chances and we missed clear-cut chances as well,” said Whitmore, who admitted the addition of West Ham’s striker, Michael Antonio, would be an asset to the team.

“Michael Antonio would have contributed, because especially in this tournament, we lacked presence in the opponents’ 18-yard box. We missed numerous goalscoring opportunities in all the games. We have to take all these things into consideration going into the World Cup qualifiers,” he added.

Whitmore has widely been criticised before the tournament for chopping and changing players over the past two years. However, when asked about how much this chopping and changing would have affected the team’s cohesion on and off the field, he noted that people on the outside will always speculate.

“People are on the outside looking in. They don’t know what’s happening, never been to a training camp so that’s just the perspective of those looking from the outside,” Whitmore said.

After being eliminated by what is considered the USA’s ‘B team’ and losing in the group stage to a Costa Rica team without their captain and best player, Whitmore was asked about his confidence in the team as they look to face tougher opposition in the upcoming World Cup qualifiers.

He said: “We have no weak teams (in CONCACAF) regardless of the personnel. We can’t look at all aspects of the football. We just have to do our self-assessment - coaching staff, players and everybody - as we move forward.”