Subratie works out the Calculus formula 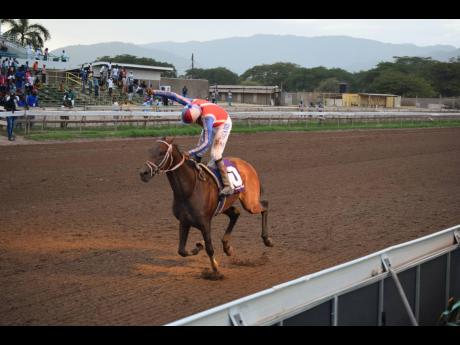 GARY Subratie’s one-month transformation of CALCULUS turned around two terrible runs in the Kingston and 2000 Guineas, resulting in a St Leger victory, which has propelled the Sensational Slam-Trinket Box colt to Jamaica Derby favourite.

Subratie said he always had a liking for CALCULUS, who was being conditioned by Anthony Nunes for Trinidadian owner Shivam Maharaj, and jumped at the chance to have Chevan Maharaj, another Trini, acquire the bay colt on learning there was the chance of a sale being on the table.

“We made an offer after the Guineas. The connection was already there from Trinidad, having won many races for Chevan there,” explained Subratie, who already had Maharaj’s 2019 Triple Crown winner, SUPREME SOUL, in his barn, moved by the owner from Nunes’ stable after failing to deliver post his three-year-old season.

A BIT OF WORK

Subratie said it took him a while to figure out CALCULUS, but he got it right in a big way, a near-seven-length victory in the 10-furlong St Leger, which has become the ultimate derby prep, bucking tradition by being run, for the second consecutive year, a month ahead of the 12-furlong Jamaica Derby.

“He had some little issues. It took me a couple weeks to figure him out. I didn’t get to train him hard for that race. I tried a different training method with him and it seemed to work. Instead of going fast, I went longer and for more pace,” Subratie explained.

CALCULUS, while at Nunes’ stable, showed promise as a two-year-old, winning at six furlongs on debut in November 2020, but was outsped at the distance by stablemates HOIST THE MAST and GO DEH GIRL on December 13.

Heading into the one-mile Jamaica Two-Year-old Stakes, two weeks later, CALCULUS’ work rate at exercise fell off, yet he still finished fifth behind stablemate FURTHER AND BEYOND, doing his best running inside the last furlong after turning for home near next-to-last.

“If you look at his races, he was always in some sort of problems. The Kingston and 2000 Guineas, he was unfortunate in those two races, getting into problems at the gate and traffic, stuff like that, but I saw him as a horse that can do two turns,” said Subratie.

After watching CALCULUS partner his grade-one runner, SENTIENT, in a seven-furlong spin the weekend before the July 3 St Leger, an easy 1:31.0, though beaten by his older stablemate, Subratie said he knew he had a winner on hand.

“I was very confident going into the St Leger, how he had improved over the couple weeks. When I first got him, he seemed to be down, not really sweating well. After 10 days, the jockeys were saying he felt really good,” he explained.

Sitting second in the trainers’ championship, $4 million in stakes behind Nunes, who is hoping to win a third straight crown since dethroning the late Wayne DaCosta, Subratie has his eyes set on the lion’s share of the $7.5-million derby purse, which would put him on his rival’s girth strap.

“I am even more confident. I beat them going away, not like I was struggling. He basically outstayed everybody. The derby shouldn’t be any problem for him, having showed he is the best stayer,” he said.

“Right now, everything is physically right with him and going in the right direction. He is training well and has done everything I have asked him.”

As for a shot at the trainers’ title, Subratie said he needs more ammo.

“I will try my best. I just don’t have the two-year-olds to compete with them. I have a few but they are not quite ready, none for this $3.75 million race coming up. I would need the two-year-olds to balance it. We’re hanging in there to see what’s happening. One day at a time,” he added.