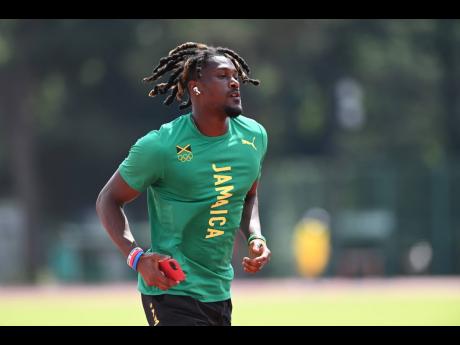 Sprint hurdler Damion Thomas knows that he has much to prove and says he can’t wait to get started to show his quality on the greatest stage.

Thomas watched on in silence as the debate raged on around the world about the trio of athletes selected to represent Jamaica in the 110m Hurdles at the Tokyo 2020 Olympic Games.

The omission of reigning Olympic champion Omar McLeod, who finished last at the Trials and complained publicly afterwards about cramps and scheduling, led to many questions about the make-up of Jamaica’s sprint hurdles trio of Commonwealth Games champion Ronald Levy, Thomas, and Olympic and World Championships medallist Hansle Parchment.

The former junior standout said he was not worried about the drama unfolding around the selection and knows very well that like he did in Jamaica a few weeks ago to book his ticket to Tokyo, he will again have to prove himself here on the biggest of stages.

Thomas stated that he has used the situation as motivation and that doing well at the Olympic Games is a challenge he can hardly wait to take on.

“I didn’t ignore it (controversy), it’s just fuel to the fire,” he said. “I knew going down to Jamaica about the controversy and the exemptions and at the end of the day, I had to just prove myself.

“I know that if I made the squad there was no taking that from me. I knew that if they took it from me I was definitely going to say something about it, but I didn’t have to, so God willing.”

Thomas, who won the World Under-20 title in 2018 in Tampere, Finland, pointed to his experience at that level, as preparation for his Olympics assignment and pointed to his training since his second-place finish at the National Senior Championships in a personal best 13.11 seconds, as providing a good marker for his readiness for the Games.

“I think it’s just getting that experience on the world level, even that experience travelling, so I mean it’s my first time Tokyo, but it’s not my first time in terms of a world competition. So there might be some little emitters but it’s nothing that I’m not accustomed to already, this time it’s just older competition but we are all here to run the same distance and the same race.

“It’s been some great work, I just want to say that ever since the Trials finished, practice has felt a lot better, I have been a lot quicker and smoother, I’m feeling healthy, I am feeling refreshed, and I feel rejuvenated, so I am really looking forward to it,” Thomas told The Gleaner.

“Now it’s more about staying clean and not forgetting the simple things like starting right, staying tall over the hurdles, the little things,” Thomas added before sharing his thoughts on the competition.

“It’s tight, obviously Grant Halloway has been running good all year, but it’s the hurdles. I am going to give him a run for his money. When it’s time, I want to give every man a run for his money and may the best man win,” Thomas said. “I know that if I execute right and God got favour over me, then I can get a medal here, so that is the goal.”

Thomas, who jointly owns the World Under-20 record of 12.99s with France’s Wilhem Belocian, earlier this year, won the NCAA Indoor 60m hurdles title with the fifth-fastest time in NCAAA history, 7.51s, the fastest time in Louisiana State University history.

The 22-year-old, who celebrated his birthday two days after running second at Trials and stamping his ticket to the Olympics, says he is not putting any pressure on himself and is instead focused on executing his races well and enjoying the experience of his first major senior championships for Jamaica.

“I am just trying to have fun. I am young, I just turned 22, this is my first time out here. I don’t have anything to prove. I feel like me making it is already a goal, so now it’s just making it through the rounds, having fun and executing,” he said.