Athletes get set for Olympics track and field 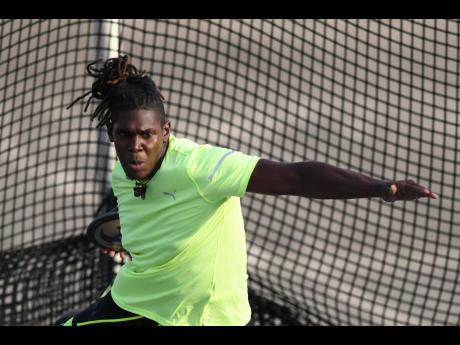 This has been anything but a straightforward and comfortable build-up to the Olympic Games by discus star Fedrick Dacres.

Dacres, who won the silver medal at the 2019 World Athletics Championships in Doha, Qatar, has had to deal with setback after setback over the past few months and only arrived in Tokyo mere hours before the start of his competition.

Still, the 27-year-old is not looking for excuses as he gets ready to begin his push towards his first Olympic podium as one of 13 Jamaicans set to feature on the opening day of athletics competition at the Tokyo Olympic Stadium.

The eyes of the world will invariably be fixed on the first struts of sprint queen Shelly-Ann Fraser-Pryce and the lady who sits on the Olympic sprinting throne, Elaine Thompson Herah, as Jamaica’s track and field stars look to take Tokyo after a so-far uninspiring start in the country’s non-athletics assignments at Tokyo 2020.

“With everything, with the mishap, I am here now. It is what it is, and we just have to get to work,” Dacres told The Gleaner.

The mishap was his delayed arrival in Japan due to extra COVID-19 safety certification and quarantine requirements that he needed to fulfil before being allowed to travel to the Games due to his travel history.

Add to that the fact that Dacres is still trying to really find his range after being forced to repair a torn ligament in his left wrist in late 2020.

“In terms of shape, I feel good despite being a bit jet-lagged and I am a smidgen off,” he said. “I think I have, like, a day or so to get my rhythm in check. I did a training session (since arrival), and it didn’t feel bad, and we are seeing improvements.”

“I’m really excited to compete again, coming back from a few Diamond League meets where I didn’t do so well. I went home and worked, and I feel in better shape now, and I definitely expect a better performance. The objective is always to medal, so that’s the order of the day,” added Dacres, who has gone 66.01m so far this season, way off his national record (NR) mark of 70.78m set in 2019 or the 69.67m he did last season.

“Despite the surgery, it was something that was needed, so really and truly, I couldn’t go around that, but it’s holding up fine. I can’t really complain,” he said. “It twitches every now and again. It’s not what it was, but it’s better than what it was a few months ago, so I am thankful for that. It’s a continuous process, so I am thankful for the improvements, and I don’t think I had the best preparations coming into an Olympics, but we are here to work and get the job done,” added Dacres, who lines up at 11:20 a.m. on Friday (Thursday 9:20 p.m. Jamaica time).

Traves Smikle (62.10m this season) will be the first Jamaican in action in the other discus qualification group, which gets started at 9:45 a.m. (Thursday 7:45 p.m.).

With Jamaica going into an Olympic Games without the guaranteed success of Usain Bolt for the first time since Beijing 2008, his medal magnet ‘icon-in-crime’ Shelly-Ann Fraser-Pryce will carry the bulk of attention in this Jamaican team – and the bulk of the pressure as well.

Fraser-Pryce’s 10.63 seconds NR this season means that she is widely tipped to win gold in the 100m and join Bolt as the only person to have won three Olympic gold medals in the 100m, but she must first navigate the rounds, which face the starter at 12:15 p.m. (Thursday 10:15 p.m.).

If she is to reclaim the Olympic throne, Fraser-Pryce will have to unseat her countrywoman, former training partner, and reigning double Olympic sprint champion, Elaine Thompson Herah, who is also flying this season, having gone 10.71s. More friendly fire is expected from Shericka Jackson, who has dropped the extra mileage in the 400m and has put her hand up with a 10.77s clocking in the short sprint this season.

World Championships silver medal winner Shanieka Ricketts has looked excellent in training and will be pushing for a medal in the women’s triple jump along with Kimberly Williams, who comes into the Olympics on the back of a personal best 14.69m effort earlier this season.

Jamaica will also line up in the mixed 4x400m relay heats at 8:12 p.m. (6:12 a.m. on Friday) to close out their assignments on the opening day of competition.