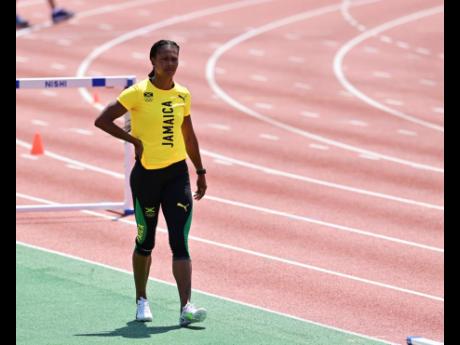 Gladstone Taylor
Jamaica’s Natasha Morrison at a training session with the at the Edogawa City Athletic Stadium in Tokyo, Japan on Thursday July29.

The Gleaner has been reliably informed that the Natasha Morrison has been added to Jamaica’s women’s 4x100m relay pool, with Tiffany James replacing her as an alternate.

Veteran coach Stephen Francis had warned that Jamaica could possibly be forced to withdraw its women’s sprint relay team, pointing out that Thompson Herah, Fraser-Pryce and Jackson doubling in the 100m and 200m and then returning two days later to run in a relay heat, would create workload issues for the athletes.

Francis describe that scenario as “stupid” and blamed the make-up of the team for the issue.

Fraser-Pryce, Thompson Herah, and Jackson are joined in the women’s 4x100m relay pool by fourth and fifth-place finishers at the National Senior Championships, Briana Williams and Remona Burchell, with Natasha Morrison, who finished sixth at the trials, originally listed as the alternate for the event.

The issue arose over the fact that two of the competitors in the individual events would also have to run in the heats of the women’s 4x100m, which start two days after the 200m final. This could see the trio in the individual sprints running a potential six rounds and two relay legs in eight days.

However, according to our information, Morrison’s addition the relay pool as been approved by organisers, with another athlete, Tiffany James, who was originally selected to feature in the 4x400m Mixed Relays, replacing her as an alternate.