Now is the time – Goule 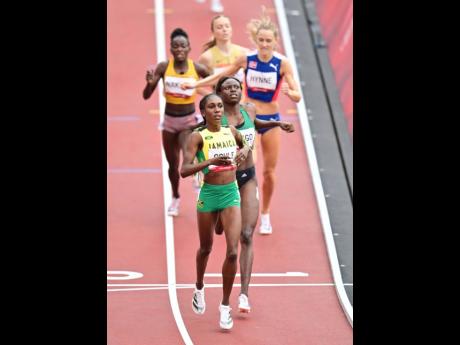 Gladstone Taylor
Jamaica’s Natoya Goule walks across the finish line as she cruises to an easy victory in the women’s 800 metres event at the Tokyo 2020 Olympics, at the Tokyo Olympic Stadium in Tokyo, Japan.

Jamaican middle-distance standard-bearer Natoya Goule believes that she is in the shape of her life and after easing to a comfortable victory in yesterday’s women’s 800 metres heats at the 2020 Tokyo Olympics at the Tokyo Olympic Stadium, in Japan, on the opening day of athletics.

The experienced Goule says she has never felt better and is backing herself to finally get on the podium at a major international senior championships.

“This is the best I have ever been in my life,” said Goule. “With this preparation coming in, I am just looking forward to seeing what God’s plan is for me because I am really ready.”

“I definitely can get on the medal podium if I go out there and execute my race properly. I definitely can because I am in the shape to do it. I am just as good as anyone else out there, so I just have to go and get it done,” added Goule, who pointed to her winning time and the minimal effort expended as proof of her conditioning.

“I think it was good because I slowed down and I still ran under two minutes,” said Goule. “I couldn’t wait to get started. I was so anxious, but I am better now because seeing everyone competing and knowing you’re the first one on the track for Jamaica, you have to go out there and set the trend.”

Goule, who finished sixth at the World Championships in Doha, Qatar, believes that she can have a much better assignment here in Tokyo, adding that she has learned from her technical mistakes and will be looking to make amends this time around.

“It’s very important to know what time you come through at the 400-metre mark because that was my mistake in Monaco. I didn’t realise what my 400-metre time was, and I still moved at 300 metres, and that messed up my race. But I still got my third-fastest time ever, so making that mistake showed me that I am capable of doing really well because normally if I did something like that, I would end up over two minutes. So that in itself was a confidence booster,”she said.

Goule has already gone 1:56.44 this season, making her the third-fastest woman in the world, just shy of her 1:56.15 National Record mark, which was established in 2018.